Rabat - Morocco adopts a "mature and balanced" approach regarding the Sahara issue, the US Under-Secretary of State for Political Affairs Thomas Shannon said. 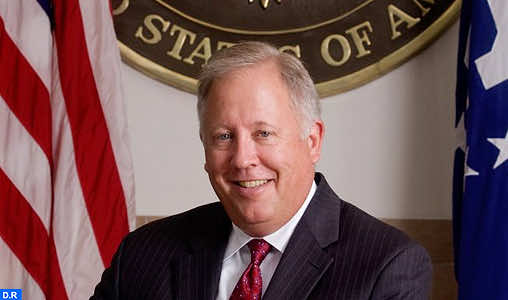 Rabat – Morocco adopts a “mature and balanced” approach regarding the Sahara issue, the US Under-Secretary of State for Political Affairs Thomas Shannon said.

“Morocco’s autonomy proposal is realistic, serious and credible,” Shannon noted in an interview published on Friday by the daily “Akhbar Al Yaoum”, stressing that the Kingdom “adopts a mature and balanced approach on the Sahara issue”.

Shannon, who reaffirmed his country’s support to the UN efforts on this issue, said that Morocco “is a partner for the US”, adding that the Sahara issue is a priority for Morocco as well as for the United States.

“This is why we support efforts made by the UN and we believe in the possibility of reaching a solution through the UN,” he said.

Shannon, who is on his first visit to Morocco since his appointment as Under Secretary of State, said that if he chose Morocco to start a tour in the region, it is because the Kingdom is “a key ally of the United States”, highlighting “long-standing diplomatic relations between both countries”.

The US official said his country wants to further develop its strategic relations with Morocco, adding that both countries make efforts in this context to promote dialogue and consultation, in particular the strategic dialogue.

“We have, on the other hand, a partnership with Maghreb countries such as Morocco and with Sahelian countries like Mali, and we will continue to work alongside our partners to address these challenges,” he said.

Shannon held talks Wednesday in Rabat with Delegate Minister to the Minister of Foreign Affairs and Cooperation Mbarka Bouaida, which focused on the strategic dialogue between Morocco and the United States.

Morocco’s Princess Hasnaa Calls for Sustainability as Part of Education

Morocco’s Princess Hasnaa Calls for Sustainability as Part of Education