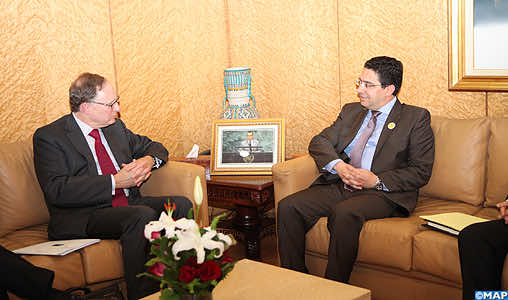 “My visit to Morocco seeks to examine means to consolidate partnership between Morocco and NATO an deepen bilateral political consultations in the light of the growing security challenges that face Mediterranean countries”, Vershbow told the press following his talks with Minister-Delegate to the Minister of Foreign Affairs and Cooperation, Nasser Bourita.

He stressed the need for expanding cooperation between the two sides to encompass other political and economic fields, adding that they tackled, on this occasion, Moroccan-NATO partnership and security challenges in Libya and the Sahel region.

NATO Deputy Secretary General, Ambassador Alexander Vershbow, is heading an important delegation on a visit to Morocco on February 18-19.

He seized this opportunity to brief the Moroccan minister on the upcoming NATO Summit, scheduled in Warsaw in July.

For his part, Bourita said that NATO Deputy Secretary General’s visit represents recognition of the important role played by Morocco, under the leadership of HM King Mohammed VI to promote regional peace and stability.

Morocco’s experience and expertise in dealing with security challenges are widely recognized, he said, adding that this visit was an opportunity for NATO officials to get informed about Morocco’s positions and vision, which are judged as pertinent.

The Moroccan minister also hailed the excellent relations between Morocco and NATO, pointing out that they are founded on the mutual respect and cooperation in well targeted fields.