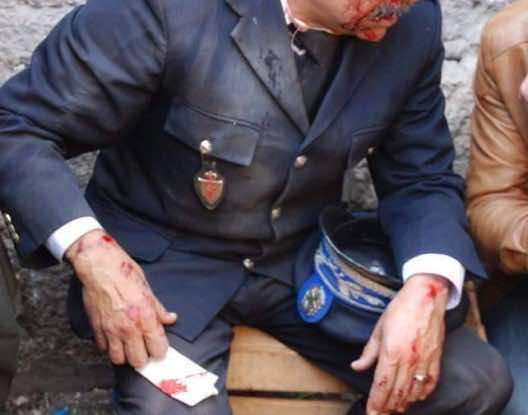 Rabat – A Moroccan security officer was killed by a car driven by the son of a justice official, who was driving while under the influence of alcohol.

A first sergeant of the Royal Gendarmerie lost his life Saturday morning after Hassan Al-Hajooji, the son of a Moroccan court official, fatally struck the officer with a car at a roundabout linking Sidi Harazem to Taounate around 20 kilometers away from Fez at 4:30 a.m. local time,. Al-Hajooji was intoxicated at the time of the incident.

A source who inspected the scene told Akhbar Al-Yaoum that the 32-year-old son of an official at the public prosecutor’s office of the court of appeals in Fez dragged the late first sergeant behind his father’s Mercedes C220 for a long distance. The officer was inspecting a medium-sized truck when he was struck by the car, which bore the emblem of the Attorney General’s office.

According to the same source, the car hit the officer and the truck that he was inspecting at a dangerously high speed, as indicated by the nature of the injuries found on the officer’s body during the post-mortem examination.

According to eyewitnesses cited by the same source, the driver sped past the roundabout after striking the truck and the officer, but then returned to the scene of the incident only to exit his vehicle and beat the truck driver with his hands before fleeing the area again.

The Royal Gendarmerie arrested the alleged perpetrator in his father’s house just a few hours after the hit-and-run. The car that the accused drove bore the emblem of the Attorney General’s office, which greatly facilitated the investigation.

According to the newspaper, Sunday morning the body of the first sergeant—a 34-year-old father of two—was transferred to Casablanca, where an official autopsy took place before the body was returned to the family. The autopsy report showed severe wounds and bruises corresponding with the speed of the vehicle that struck him.

The case is expected to be referred to the lower courts, which issue sentences for up to five years in prison, on Monday in the event that investigators classify the incident as a traffic violation. The accused could face charges of manslaughter, public intoxication and driving under the influence of alcohol.

The truck driver and the victim’s colleague have both told investigators that the driver entered the roundabout from the wrong direction and took the road in which the victim was conducting a routine inspection of the truck.