Rabat - Since coming on board, almost a year ago, Donald Trump, a candidate for Republican nomination has incensed everyone with his colorful verbosity, incisive criticism, biting remarks and frontal attacks. He attacked viciously Muslims, disavowed directly Mexican migrants and mocked ferociously fellow candidates for nomination on both sides, making of controversy his lethal weapon for achieving his aims. 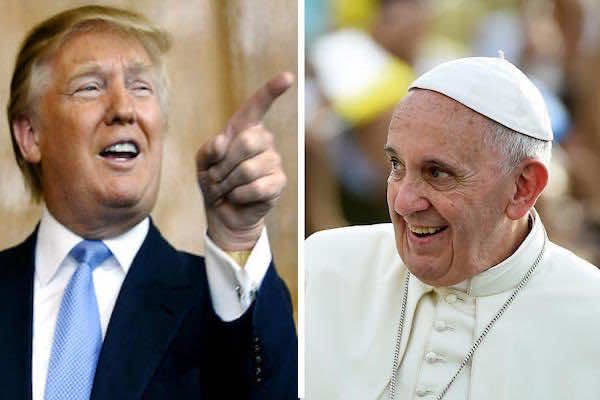 Rabat – Since coming on board, almost a year ago, Donald Trump, a candidate for Republican nomination has incensed everyone with his colorful verbosity, incisive criticism, biting remarks and frontal attacks. He attacked viciously Muslims, disavowed directly Mexican migrants and mocked ferociously fellow candidates for nomination on both sides, making of controversy his lethal weapon for achieving his aims.

As he went on unabated with his linguistic ranting and inter-cultural offences, Donald Trump seemed to gain popularity among certain voters of America, who go against the essence of this country, which is the land of migrants by excellence.

It is customary that American candidates, to either party nomination or the presidential post make the most incredible promises to the voters, which once they are elected to the position of US presidency either drop altogether or mitigate. However, Trump’s electoral philosophy seems to have shaken the foundations of the Vatican beyond belief, more than anybody else in the past.

Irritated by the racist quips of Trump, The Christian establishment dispatched Pope Francis in person to deliver a strong message to the American voters from the very crossing point to the United States on the Mexican soil, on the Rio Grande River, by addressing the American people in the following denunciatory terms of Trump’s person:

“Vote, don’t vote, I won’t meddle. But I simply say, if he says these things, this man is not a Christian”

On his return trip to the Vatican the pontiff declared to the journalists quite clearly that:

“A person who thinks only about building walls, wherever they may be, and not of building bridges, is not Christian. This is not the gospel”

In many ways, this might appear like a sort of excommunication from the Christian faith. Nevertheless, the Pope gives Donald Trump indirectly a chance to redeem himself:

“I say only that this man is not Christian if he has said things like that. We must see if he said things in that way and I will give him the benefit of the doubt,”

In response to the Pope’s unveiled attack on his racist declarations, Trump reacted violently:

“For a religious leader to question a person’s faith is disgraceful. I’m proud to be a Christian.”

In addition, he even went the extra mile to threaten the Vatican to withdraw American protection, in time of need, if he is elected:

“If and when the Vatican is attacked by Isis, which as everyone knows is Isis’s ultimate trophy, I can promise you that the Pope would have only wished and prayed that Donald Trump would have been president because this would not have happened,”

To show his distaste for the Argentinean Pope, Trump said that he believes that the latter has put on a politician’s hat and not that of a man of religion. He went on to add that the Pope was, ultimately, used by the Mexican government as a “pawn” to strike at him for his promise to build a wall between Mexico and the US and make the Mexican government pay for it.

The reasons for papal intervention

There is no doubt that Donald Trump is very popular among white America that is scared to death of migrants coming from Latin America and of Islam because these two factors might in the future change power configuration of the social fabric of the United States. The core of American society is the WASP (White Anglo-Saxon Protestant) social group and its philosophy. While the eastern part of America is highly intellectual and the West is liberal, Mid-America, which is the Great Plains, is very religious and extremely conservative and is humorously labeled in the literature, tongue in cheek, as ”a region brought up on beef and Bible.”

Mid-America and the conservative Americans that are motivated by strict Christian values and evangelical traditions consider migration as a threat to their existence and supremacy in America. This supremacy was established since the time of the Thirteen Colonies (1607-1776)[i] and the declaration of the independence of the United States of America in 1776. The true danger is that the WASP supremacy in America is progressively being diluted by Mexican and Latin American migrants, who are Catholics in their majority.

If the Pope, in person, is intervening in such a high-profile manner, he is doing it purposefully to defend the rights of the Catholics against the supremacy of the WASPs in America: the land of opportunity.

During the last century, the US considered Latin America as its backyard and intervened its affairs, at will, either directly through military campaigns or indirectly through CIA covert operations. This was the materialization of the American Big Stick policy of President Theodore Roosevelt at the beginning of the 20th century in which he professed “speak softly, and carry a big stick”.[ii] The US intervened at will in Latin America and the countries were referred to, in the political science literature, as “Banana Republics,” meaning corrupt plutocracy entities unable to stand up to America’s might and will.

If clandestine migration is not checked, the WASP white race of America will probably be, in few decades, diluted in the Latin migrant component, which might rule America in the future. Already, today, there are so many politicians, military chiefs and businessmen of Latino origin in America, in the forefront of American success.

To check once for all clandestine migration from Mexico and Latin America, Donald Trump, in his candid and direct manner, promised in a condescending tone, during the third Republican debate in October 2015: “We’re going to do a wall. We’re going to create a border,” and stressed the fact that “Mexico is going to pay for the wall.” Donald Trump is truly a mirror image of the internal fears of many white Americans. When he says what he says, he reflects the opinion of many concerned white Americans.

Donald Trump believes that, in view of his declarations on Mexican migration and ways to stop it, the Mexican Government called upon Pope Francis to intervene on their favor. It appears that the Pope answered Mexico’s call by delivering a speech from the Mexican-American border, lambasting the controversial Republican candidate hopeful and almost excommunicating him from the Christian faith by suggesting overtly that “he is not Christian.” Trump, in return, considers the pontiff to be a “pawn” in the hand of Mexican politicians.

The feud between the Roman Catholic world represented by Pope Francis and Donald Trump, a controversial republican WASP is now on openly and officially. In many ways it epitomizes the eternal conflict that exists between the have-nots and the rich. Will this feud continue between the two sides? Will it affect the campaign of Donald Trump? What will happen if Trump is elected President of the United States, will he bear pressure on the Roman Catholics to choose another Pope in revenge for the present papal affront? Or will both people tone down their misunderstandings and try to live with each other in peace? Only time will show how things will unfold in the coming weeks.

[i] The Thirteen Colonies were originally called the Colonies of England (1607-1707) and afterwards they were known as the Colonies of Great Britain (1707-1776). In 1776, they declared independence from England and took the name of the United States. They achieved their goal with the help of France, Spain and Holland after winning the American Revolutionary War (1775-1783).

[ii] US President Theodore Roosevelt described his style of foreign policy as “the exercise of intelligent forethought and of decisive action sufficiently far in advance of any likely crisis” (Cf. Roosevelt, Theodore (1913). Theodore Roosevelt: An Autobiography. The Macmillan Press Company)