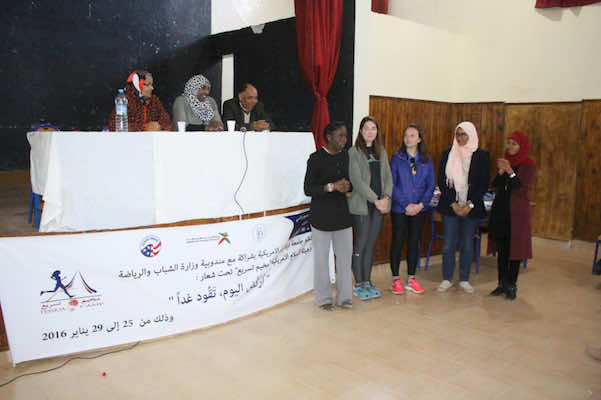 Rabat – Two students from the University of Delaware, Elizabeth Clinton and Nora Reynolds, held a five-day women’s health and exercise program in Ouarzazate last month to empower women to take charge of public spaces and exercise outside, according to the camp’s website.

Called Tessria, The camp, which took place from January 24 through January 29, coached 20 women, age 18 to 30, on long-distance running, goal setting, team building and combatting sexual harassment. During their final day at the camp, participants completed a public run through the streets of Ouarzazate to encourage women to exercise in public spaces, according to the students’ crowdfunding page for the program.

Clinton and Reynolds held a deep interest in running from their membership in the University of Delaware running team, which prompted them to continue their training while studying abroad in Morocco, according to their interview with The Review, a university newspaper.

Even though they studied abroad at separate times – Clinton in June 2014 and Reynolds in January 2015 – they both noticed that it was not common to see women exercising in public because of frequent sexual harassment.

Their observations complemented findings by Fulbright scholar Anna Boots and arabist Safaa Monqid who have said that female obesity in Moroccan cities is rising at a higher pace because sexual harassment deters urban women from exercising outside. Rural women, on the other hand, continue to perform difficult physical labor related to agriculture and daily life, which keeps them in shape.

After the students reached out to the Moroccan Ministry of Youth and Sports to find a community in need of health education programming, Peace Corps volunteers in Ouarzazate reached out to them because some of the women they worked with had expressed an interest in exercise and personal fitness.

Clinton and Reynolds received a grant from their university to return to Morocco and initiate the project. After raising the remaining funds through crowdfunding, they were able to lead an exercise and leadership program for women called Tessria Camp with a budget of USD $8,000.

Some of the camps’ participants chose to remain veiled during their time at the camp. Although Clinton initially thought that the veils would be an obstacle to achieving the camp’s running goals, participants insisted that wearing a hijab was their choice and that veiling would not prohibit them from meeting their fitness goals.

“Honestly, it was more successful than I thought it would be,” Clinton told The Review, a student-run newspaper at the University of Delaware.