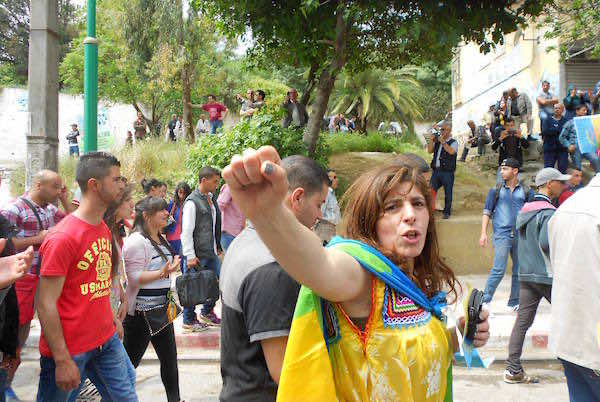 Rabat – The Algerian police arrested the president of the Amazigh World Congress (CMA) upon her arrival in the Houari Boumediene international airport in Algiers from Casablanca on Tuesday.

In a “hastily” sent text message to Siwel – a news source associated with the Provisional Government of Kabylie (GPK) – Kamira Nait Sid, the activist group’s president, said that the police had confiscated her passport and detained her without charges. The reasons for the police actions are still unclear.

Founded in France in 1995, The CMA is an international non-governmental organization that aims to protect and promote Amazigh cultural and political interests. Sid, an Amazighi activist from Algeria, was elected to the position last July after serving as a representative in the congress.

The GPK was established in 2010 as the provisional government of the Kabylie region in northern Algeria by the Movement for the Autonomy of Kabylie (MAK). Sid has supported the movement’s efforts in seeking independence from Algeria at the United Nations in the past.

Morocco has officially supported the right of “self-determination of the Kabylie people” in the United Nations.

Last October, Abderrazzak Laassel, the Deputy Permanent Representative of Morocco to the United Nations, told UN member states that “it is deplorable that the legitimate aspirations of Kabylie’s native people are muzzled, their human rights are breached on a daily basis and their legitimate representatives and leaders are persecuted and exiled.”

GPK’s interim president, Ferhat Mehni said last week that if the region gains independence, relations between Morocco and the GPK would be different from the strained relationship between Morocco and Algeria because the GPK does not recognize the so-called Sahrawi Republic, and support Morocco’s sovereignty over the Sahara.