Rabat - Moroccan Trade Unions have announced that Wednesday’s national strike was successful with a participation rate of 84.8%. 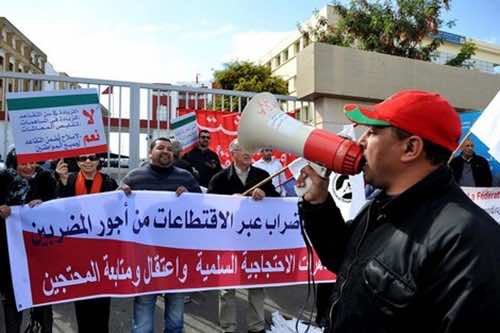 Rabat – Moroccan Trade Unions have announced that Wednesday’s national strike was successful with a participation rate of 84.8%.

According to the National Committee, the participation rate exceeded the overall rate of working class and wage earners.

Miloudi Moukharik, Secretary-General of the Moroccan Labor Union explained that the strike, which started at 12 a.m. Wednesday, is a warning to the government to negotiate seriously regarding the union’s social demands.

According to a communiqué released by the Unions, working class people were urged to boycott their work in different sectors all around the kingdom, including universities, hospitals, and banks.

Miloudi added that 1,500 rural and urban communes in the kingdom participated in the strike.

The Minister Delegate to the Head of the government in charge of civil service and the modernization of administration, Mohamed Moubdii, said that in general, the strike had no impact on Moroccans with respect to accessing their daily services, and that public services continued to cover the citizens’ needs.

The Minister Delegate added that the Moroccan government would continue to reform the pension fund.

“We hope the Unions will take initiatives and find solutions in order to secure retired people’s rights,” he said.

Wednesday’s national strike also involved constitutional councils, including the High Commission for Accountability, the National Council for Human Rights, and the House of Advisers.