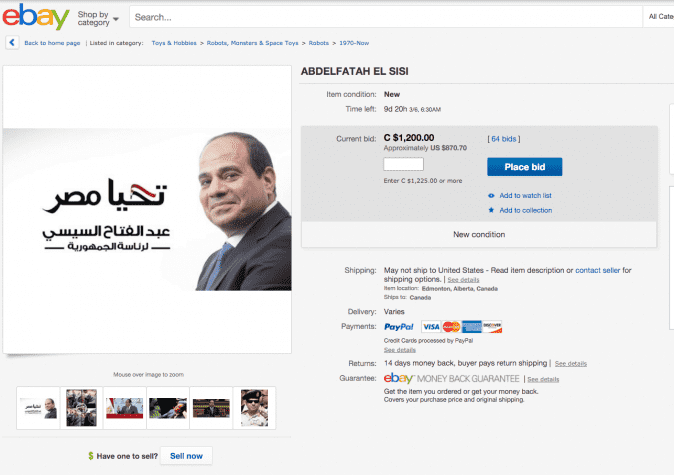 Rabat – Egyptian President Abdel Fattah El-Sissi has been put up for sale on the e-commerce website eBay, after comments he made while outlining his economic plans for the country.

One sharp- witted eBay user created the auction in reaction to the speech made by El-Sissi on Wednesday in which he commented that “if I could sell myself [to benefit the nation], I would have done it.”

Egypt’s largely tourist-reliant economy is currently suffering a dip in reaction to recent terrorist attacks in the country.

“For sale on eBay, Field Marshal, Doctor of Philosophy with a military background, decent condition, used by the previous owners (Gulf royal families)” read the description.

“The field marshal himself stated that if selling himself will help, he will not hesitate to do it. So, we are doing it for him, for us and for the humanity.”

Within a few hours of the auctions creation, bids of up to $100,000 had been lodged. More than a 100 people reacted to the bid. The auction to purchase El Sissi has been removed from the site.

This isn’t the first time El-Sissi has been ridiculed for his bizarre declarations. Last year, he claimed that he was a God-sent doctor who would “diagnose the problems [Egypt faces], he made me like this so I could see and understand the true state of affairs. It’s a blessing from God.”

Despite this claim, the reality is that since el-Sissi took power after the other throwing of former leader Hosni Moubarak, human rights issues have been prevalent.

“The el-Sissi government is acting as though to restore stability Egypt needs a dose of repression the likes of which it hasn’t seen for decades, but its treatment is killing the patient” according to Joe Stork, Human Rights Watch deputy Middle East and North Africa director.