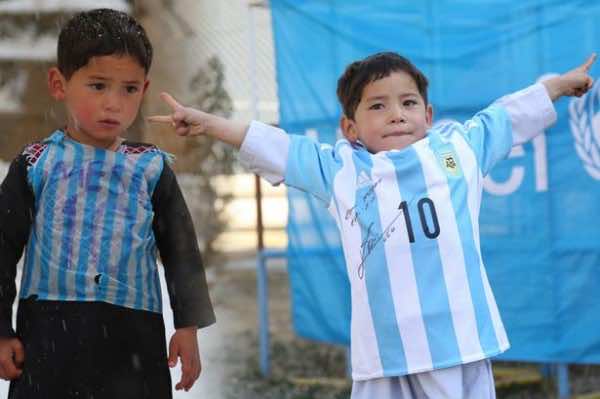 Rabat – Five-year-old football fan, Murtaza Ahmadi, dubbed ‘Lionel Messi’s Biggest fan’, has had his dreams made reality thanks to his hero.

The boy, from Afghanistan, made international headlines after appearing in a plastic bag styled to look like Messi’s shirt. Following an online campaign to find out his identity, the boy is now the proud owner of two signed shirts and football.

“He kept crying for days, asking for the shirt, until his brother Hamayon helped him make one from the plastic bag to make him happy.” The boy’s father, Arif Ahmadi, was quoted by CNN as saying.  “He stopped crying after wearing that plastic bag shirt.”

Murtaza was identified as the boy in the picture thanks to his Australia-based uncle Azim Ahmadi. Murtaza’s uncle saw the campaign and contacted the BBC. Messi’s representatives were then put in contact with UNICEF in Afghanistan, who made contact with the boy.

“I love Messi, and my shirt says Messi loves me,” UNICEF quoted Ahmadi as saying.

In an interview with CNN, Arif Ahmadi described the gift as “one of the happiest moments” of his son’s life.

It was initially thought that Messi, who this week scored two goals against Arsenal to put Barcelona in the driving seat in their Champions league tie, would meet the child in person in Spain.

Whether this will occur seems unclear. Regardless, the act of charity symbolizes a special connection between Messi, who himself faced many obstacles to become a professional footballer, and his young fan.