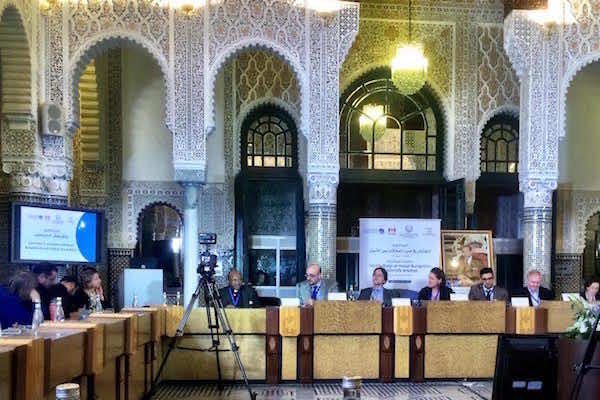 Rabat – Wednesday marked the inauguration of the Center for Research and Training in Interfaith Relations at the Rabita Mohammadia des Oulémas headquarters in Rabat.

The event started with the Canadian Ambassador Nathalie Dubé and Ambassador to the European Union Rupert Joy addressing the attendees about the necessity of interfaith and intercultural dialogue. While Ambassador Joy stated that the formation of the EU was itself an example of bridging cultural norms, further dialogue will be needed to address growing tensions in Europe regarding the current refugee crisis.

During a discussion on the concept of mutual acceptance across different religious texts, Rev. Karen Smith from Akhwayn University in Ifrane stated that she was specifically avoiding using the word tolerance in her arguments. “I never used that word,” she said in response to a question regarding Evangelical teachings of tolerance. “Tolerance is to greet your teeth and smile,” she claimed as she explained that rather than tolerating our differences, we should embrace them.

The exchange itself highlighted the hurdle of maintaining the subtle nature of an argument over the linguistic divides that often accompany these types of dialogue.

Bringing the discussion from interpretation to application, Dr. Farid El Asri from the International University Rabat stressed the importance of the “integration of text into…reality,” and “how to make interpretations in modern time.”

Mr. Shamil Idriss, CEO for the US based nongovernmental organization Search for Common Ground, in trying to dispel myths surrounding interfaith dialogue, emphasized that an “agreement is irrelevant when trying to obtain progress through dialogue.” He maintained that researchers from MIT have found that the most important part of any dialogue is the free exchange of ideas and beliefs, not necessarily an agreement.

Mr. Idriss also warned that the essence of a religious leader shouldn’t always be to speak out against those who are against the idea of mutual acceptance. “Don’t silence them, but give them a platform to be heard” he said, contending that the only way to reach people who work against efforts towards an interfaith society is to bring them into the dialogue.

The inaugural event ended with an interfaith musical concert at Rabat’s national library, a project from the Belgian/Moroccan artist Rafik El Maai. The concert featured traditional songs from multiple cultures and faiths, including a rendition of the famous American protest song “We Shall Overcome” both in its original English and Arabic translations.