Rabat - Avichay Adraee, the Israeli Defense Forces’ spokesperson for Arabic media stirred uproar on social media when he posted on Thursday alternative lyrics to Saad Lamjerrad’s hit song “LM3ALLEM,” which can be translated as “teacher” or “master.” The Israeli army official misused the song’s lyrics to condemn what he called “Palestinian terrorists.” 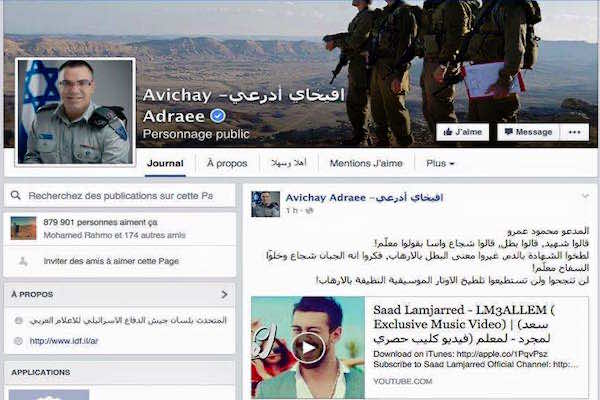 Rabat – Avichay Adraee, the Israeli Defense Forces’ spokesperson for Arabic media stirred uproar on social media when he posted on Thursday alternative lyrics to Saad Lamjerrad’s hit song “LM3ALLEM,” which can be translated as “teacher” or “master.” The Israeli army official misused the song’s lyrics to condemn what he called “Palestinian terrorists.”

The shahada refers to the Arabic phrase meaning “there is no God but God (Allah in Arabic) and Mohammed is the messenger of God,” which is recited by Muslims throughout their lives as a believer in the Islamic faith.

Reactions in the comments section of the post varied. While some comments were supportive of Adraee’s stance against what he calls “terrorism,” the majority considered the post paradoxical, and accused the Israeli Army for “committing terrorist acts against the Palestinians in the Palestinian occupied territories.”

Abdel Löwenherz, a Moroccan living in Luxembourg, commented: “In my opinion, you link the IDF to power, pride and valor, but does an army with these qualities kill children, women, or old people? I want to ask you, is all of Gaza full of terrorists?

“What is the Moroccan artist doing on your page? Moroccans support Palestinian unity. We strongly condemn this act when you slander the Palestinian people with your criminal words. We consider Palestine to be our second country,” Abdellah Elouarrari, a Moroccan citizen living in Qatar said.

Another Moroccan showed his admiration of Israeli scholars and expressed his support for Israel in its fight “against terrorism.”

“Greeting from Morocco to the people and scholars of Israel,” said Yassine Assou from Kenitra. “I hope that you are united against the face of terrorism all year.”