Rabat - Morocco is a guarantor of stability in the region, said on Friday German Minister of Economic Cooperation and Development, Gerd Muller. 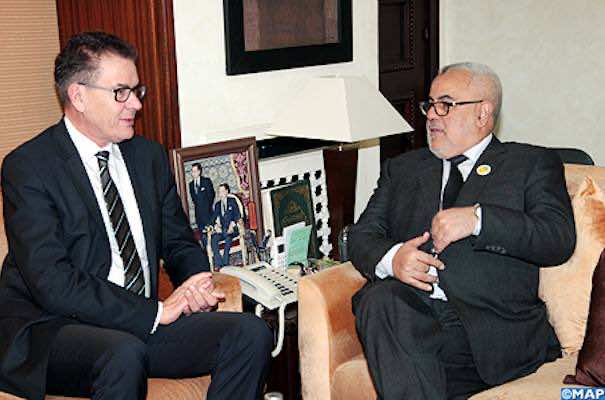 Rabat – Morocco is a guarantor of stability in the region, said on Friday German Minister of Economic Cooperation and Development, Gerd Muller.

Morocco, which has initiated important reforms in various fields, promotes security and stability in the region, Muller told the press following his talks with Minister Delegate to the Minister of Foreign Affairs and Cooperation Nasser Bourita.

He added that he discussed with Bourita bilateral relations and means to further reinforce them in different fields, highlighting the partnership between the two countries in the fields of renewable energy and rural development.

The German minister also hailed Morocco’s efforts in managing migration issue, notably within the framework of the integration of sub-Saharan migrants.

For his part, Bourita underlined that the German minister’s visit to the Kingdom confirms the shared will to consolidate bilateral relations in different sectors, praising the “strong and multidimensional” relations existing between Morocco and Germany.

He noted that since the meeting between King Mohammed VI and German Chancellor Angela Merkel in New York in 2010, important steps have been taken within the framework of bilateral partnership.

“We also discussed Moroccan-European Union relations, and we thank Germany for its constructive position and its active role in preserving the partnership between Morocco and EU,” he added.