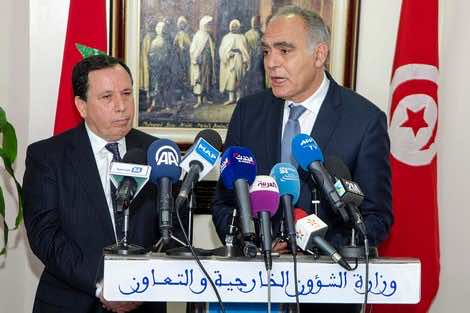 At a joint press briefing, the Tunisian minister reaffirmed the importance of the historic visit of HM the King in June 2014 to Tunisia and the Sovereign’s support and solidarity with Tunisia.

Jhinaoui also recalled HM the King’s support for Tunisian institutions and the democratic process in Tunisia.

The meeting was an opportunity to address several issues, including the deepening of the distinguished relations between the two countries, cooperation in the fight against terrorism and extremism, the revival of the Arab Maghreb Union and the Libyan crisis and its impact on security and stability in the region, he said.

The Tunisian minister praised Morocco, which hosted the inter-Libyan political dialogue and its continuing support in order to reach a political solution between all parties with the aim of preserving the unity and stability of Libya.

For his part, Mezouar said that his talks with his Tunisian counterpart were an opportunity to reaffirm the strong relations linking the two countries, noting that bilateral relations are “strong and solid”.

In this context, he stressed the importance of bilateral coordination on security issues and of political contacts between the two countries regarding issues of common concern, saying that “the two countries share similar views on many regional and international issues, including the situation in Libya, Syria and Palestine.”

Evoking the situation in Libya, Mezouar expressed the wish of Morocco to see Libyan political parties reach a consensus on the formation of a national unity government on the basis of Skhirat Agreement.

Regarding the situation in Syria, he stressed the need to support political dialogue in order to reach an agreement that will end fights and help Syria recover its unity.

As for the Palestinian cause, the Moroccan minister highlighted the importance of resuming peace talks on the basis of a two-state solution and the creation of a Palestinian state with Al Quds as its capital.