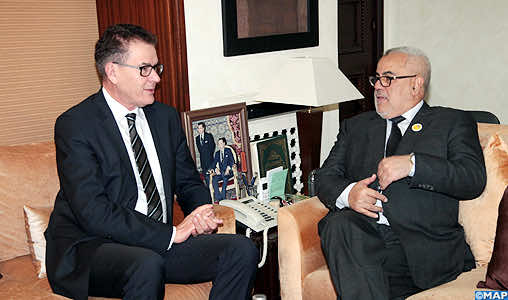 During talks with Government Chief Abdelilah Benkirane, the German Minister expressed his country’s willingness to support the Kingdom and overcome this situation, Government Chief’s Department said in a statement.

Muller lauded the humanist approach developed by the Kingdom on migration and expressed Germany’s satisfaction over Morocco’s readiness to cooperate with German authorities for the resolution of the situation of Moroccan illegal immigrants residing in Germany.

During the meeting, the two sides hailed friendly relations as well as cooperation between Morocco and Germany, which were boosted following the signing in 2013 of the Declaration of Rabat on the Moroccan-German partnership.

The German official, who is on a working visit to Morocco, also praised the political, economic and social reforms undertaken by Morocco, and hailed Morocco’s participation in Berlin’s International Green, reiterating the readiness of the German Government to strengthen partnership with the Kingdom in various fields.