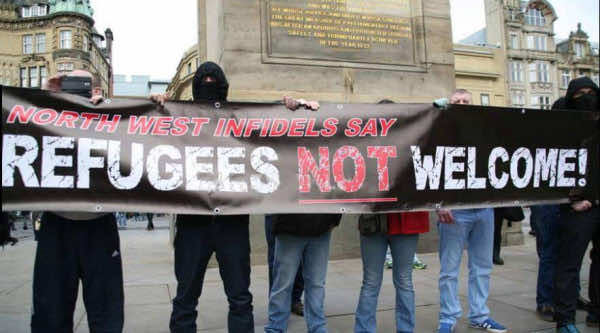 The group, who cite an opposition to ‘radical Islam and immigrants’ in their mission statement, planned to march throughout the center of the city, but were restricted due to the mass opposition they found from members of the group Unite Against Fascism (UAF).

Around 200 members of the North West Infidels gathered, and could be seen making Nazi salutes, shouting abuse about migrants, and making offensive remarks about the Prophet Mohammed, according to reports by RT.

The hostilities were short-lived, as an estimated 500 members of the UAF forced the group into a side street from the city center.

This is not the first time fascist groups have failed in spreading anti-Islamic rhetoric in the city. In September of last year, Neo-Nazi group ‘National Action’ was forced to abandon their planned protest march due to a “huge anti-fascist backlash”.

Speaking to the Liverpool Echo, spokesperson for the Anti-Fascist Network (AFN) Tom Ascaso described the day’s events as a big victory that showed “there is no place for fascism in their great city.”

“Today was a massive defeat for any hopes of a far-right street movement in Britain,” he said. “They mobilized nearly everybody the far-right can put out onto the streets. Anti-fascists only had 24 hours notice of their intention to march but still ensured the far-right protest was a total disaster. Fascists were prevented from marching in Liverpool again, showing collective direct action is still one of the best ways of restricting the growth of fascism.”