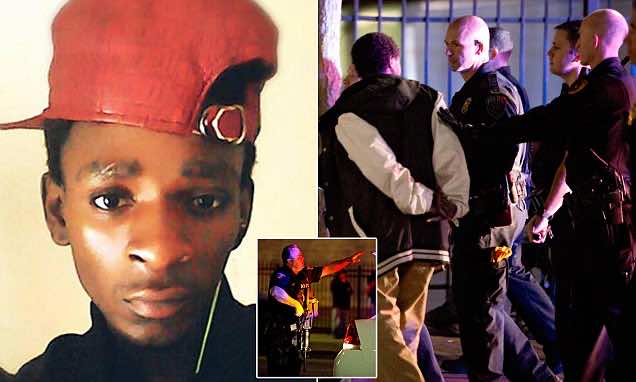 Rabat – Abdi Mohamed, a 17-year-old Muslim boy from Kenya, was hospitalized Saturday night after two Utah police officers shot him in the chest and stomach near a homeless shelter.

The shooting happened at 8:15 p.m. when police saw him arguing with a man while holding a broomstick, Fox 13, a local news source reported. After Abdi refused to drop the broomstick upon request, the officers proceeded to shoot him three times in the upper half of his body.

Mohammed was one of two suspects in an alleged assault, according to a statement released by the Salt Lake City police department (SLCPD) on Sunday.

“On Saturday, February 27, at approximately 8:00 p.m., officers witnessed two males with metal objects attacking a male victim,” the statement reads. “Officers confronted the two suspects and ordered them to drop the weapons. One of the males complied and dropped the weapon, the other continued to advance on the victim and was shot by officers.”

In the aftermath of the shooting, 100 officers were dispatched in order to contain crowds who “shouted and threw objects at the police” as a response to the officers’ actions, Fox reported.

Selam Mohammed, a friend of the victim who was accompanying him at the time, said the police gave him only one chance to surrender the broom before they began shooting.

‘The police said ‘drop it’ once, then they shot him four times,’ Mohammed told Fox. “’We were trying to break it up before the police even came, but the police ran in on foot and pulled their guns out already… not even trying to tase him or anything.”

“There is no doubt what happened is a tragedy for all involved and for our entire city,” the Mayor of Salt Lake City, Jackie Biskupski, said in a statement. Biskupski added that she recognizes that this is the third “significant use of force” incident for the city’s police department in the past month.

The incident and footage from the two officers’ body cameras are being investigated by the Unified Police Department of Greater Salt Lake. The results of the investigation will be forwarded to the District Attorney’s office for “a final determination on the shooting,” according to the statement by the police.

The two officers involved in the shooting are currently on administrative leave, a SLCPD officer told The Guardian.