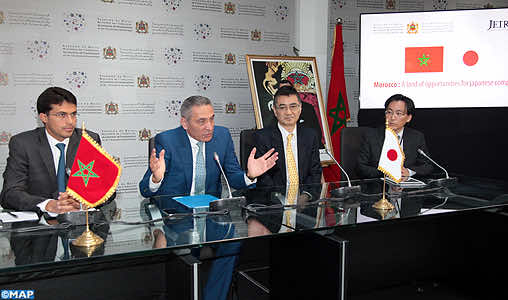 “Japanese economic operators are interested in the investment opportunities in Morocco in various sectors, notably automobile, aeronautics, agribusiness and energy”, Daisuke said during a meeting between Minister of Industry, Trade, investment and the digital economy, Moulay Hafid Elalamy, and a delegation composed of 54 Japanese businessmen.

Elalamy stressed during this meeting on the necessity for Morocco and Japan to better benefit from their respective economic potential to reach a mutually beneficial bilateral partnership.

He highlighted the competitive advantages offered by Morocco to achieve this goal, and the various ambitious strategies adopted to boost the industrial sector in Morocco.

The meeting was an opportunity to examine the means to reinforce economic relation between Morocco and Japan in the fields of investment and trade relations.

JETRO, a Japanese government-related organization that works to promote mutual trade and investment between Japan and the rest of the world, inaugurated in 2014 its bureau in Rabat, the first of its kind in Maghreb region.