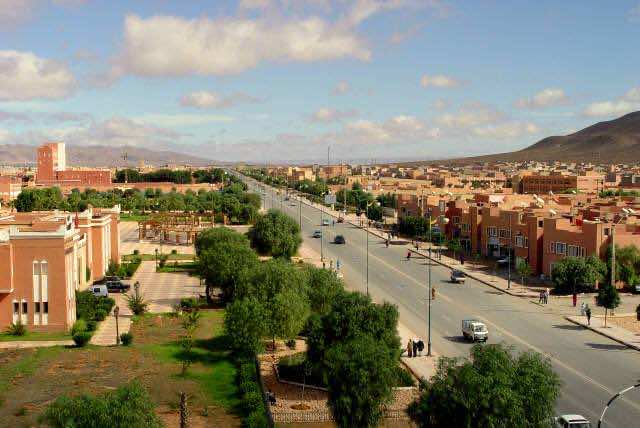 Rabat – Guelmim symbolizes cultural diversity as it embraces different tribes and races (Arabs, Amazighs, etc…) that co-existed with each other in a harmony for many years.

Before shedding light on the different aspects of its cultural diversity, let us first quickly look at Guelmim geographical location.

Guelmim, or Bab Sahara, as the late King Hassan II has named it, is the door to the Moroccan Sahara. It is a Moroccan city located on the southern slopes of the small western Atlas Mountains. It covers an area of 28 square kilometers and it is bordered to the north by Tagant, to the south by Astir and Aferket, to the east by Asrir and Fask, and to the west by Ksabi, Tagoust, and Abaino.

When we say Wad Noun, then, we are technically referring to a region made up of many neighboring territories to Guelmim such as Assa, Tata, Sidi Iifni, etc… Guelmim itself is the main city that is comprised of communities such as Fask, Taghjijt, and Tighmert.

Actually, the noticeable phonological feature of the above geographical description is the names given to the neighboring communities of Guelmim. Names such as Tagant, Asrir, and Abaino are of Amazigh origin. Thus, it is believed that Amazigh-affiliated tribes were the first to populate Guelmim and are, therefore, regarded as the indigenous people of the area.  However, that claim was not to create deterrent conditions for Sahrawi and Amazigh people to live in harmony and co-existence.

Before the arrival of the French to Morocco, Guelmim was of an overriding importance for Alaoui kings, especially under the reign of Sultan Mohamed Ben Abdullah, for it was the capital of Sahara as well as the trading center for commercial exchanges between Morocco and other African countries.

Since it was considered the trading center for commercial exchanges, it is worth mentioning that the largest market of camels in Africa, “Amhairish,” exists in Guelmim.

The camel is of cultural and historical significance in the Moroccan Sahara in general, and in Guelmim in particular.

In order to reveal the cultural richness of the city, let us look at the following list of tribes and races that live in Guelmim.

The obvious conclusion that may be derived from the list above is that more than 22 tribes exist in Guelmim, a striking feature of the city, especially if we take into account the difficulty of finding a culturally diverse community that encompasses various races and tribes living harmoniously with one another. In this regard, Guelmim is a melting pot of many cultural backgrounds where tolerance, co-existence, and simplicity are privileged over racism, sectarianism, and racial discrimination.

Considering the above data, we should keep in mind that the aforementioned tribes hold different cultural backgrounds. Some tribes are of a purely Amazigh origin, others of Sahrawi origins, and the rest are a mixture of Sahrawi and Amazigh culture. In this context, finding just two sects or tribes with a totally different cultural perception of the world that share one community is absolutely impossible due to the law of the jungle that seems to govern their relations. Mankind, since old ages, managed to control land, to praise his cultural identity, and to despise other cultures.

To highlight more on the concept of co-existence in Guelmim, let us take a sample from that list so as to prove that BAB SAHRA and healthy cultural diversity are two faces of the same coin. We take, for example, Ait Oussa and AIT Ba’amran. Historically speaking, these two tribes have nothing in common. The former is believed to have come to Morocco from the Arabian Peninsula, speak Hassani dialect, and hold a different cultural background, while the latter is one of the Amazigh tribes, speaks Tamazight, and has a distinctive cultural identity.

Though there seems to be a cultural gap between the two tribes, Ait Ba’amran and Ait Oussa existed harmoniously for many years with no regard to the cultural differences that may have affected their daily interaction. And when the interaction occurs, the Sahrawi and Amazighi abandon some of their linguistic specificity so as make the communication smoother, regardless of the fact that The Hassani dialect is the dominating tongue in Guelmim. That is to say, When a Sahrawi and an Amazighi interact, each one tries to adopt a casual, comprehensive dialect that is easily understood by the listener and speaker.

Horsemanship is one of the popular arts that Guelmim is known for.