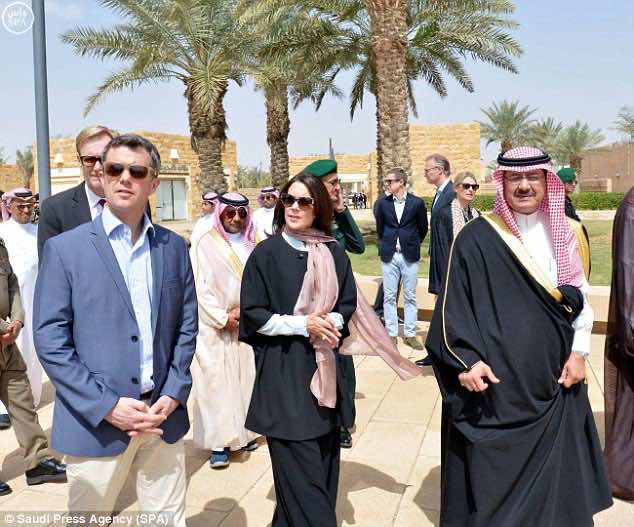 Rabat – Princess Mary of Denmark has refused to wear a headscarf during an official visit to Saudi Arabia this week, despite it being mandatory for all women in the country.

The Australian-born royal follows both Hilary Clinton and Michelle Obama who also decided against wearing the headscarf during previous visits to Saudi Arabia.

Opting to wear a respectful long black top and trousers, pictures show the 44-year-old alongside her husband, Prince Frederik, touring the country and meeting with representatives during a five-day trip.

Michelle Obama in particular was criticized in both the United States and Saudi Arabia for not wearing the headscarf during a visit in January 2015. During her visit, ‘#MichelleObamaImmodest’ trended on Twitter in both countries, as many claimed she had a lack of respect for local customs.

The Danish royal visit to Saudi Arabia has been widely criticized by politicians and activists alike in Denmark, who claim that it is not appropriate to engage with the country given their human rights record.

“The timing could not be worse. Saudi Arabia celebrated the New Year by beheading 47 people, after a year that saw a huge increase in the number of capital punishments and also reduced freedom of speech,” said Trine Christensen, a member of Amnesty International Denmark.

“Sending a delegation of the reported caliber at this time sends a very symbolic signal that what is going on is acceptable.”

Opposition MP Mette Gjerskov similarly agreed, stating, “Saudi Arabia is one of the most fundamental regimes in the world, where women are not allowed to drive and where death sentences are given for being homosexual.” This, he argued, was reason enough not to have diplomatic relations with the country.

Laws in Saudi Arabia prevent women from undertaking basic tasks such as going to a restaurant alone or working without the permission of male family members.