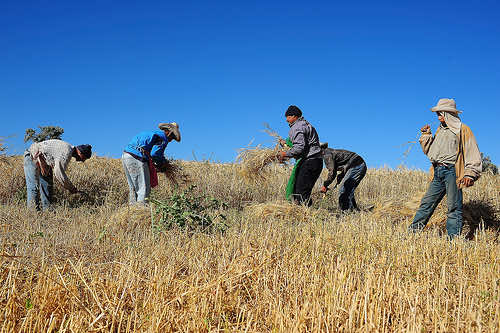 Rabat – Moroccan wheat crops are expected to amount to only half of last year’s harvest as this season’s drought takes its toll on the kingdom’s agriculture, official estimates show according to Bloomberg news.

A lack of rainfall is to blame for the poor grain harvest that Morocco relies so heavily upon. Other than a handful of rainy days in February, there has been little precipitation all season. Many farmers are saying that the rainfall was too little too late, in what they describe as “one of the worst droughts in living memory.”

As most meals are eaten with bread or contain wheat, Moroccans consume roughly three times the global average yearly.

While more developed countries may be able to limit the effects of poor rainfall, one of the main issues surrounding Moroccan agriculture is that only 15 percent of the land is irrigated. This means that harvests are almost solely dependent on natural rainfall.

“This kind of agriculture has no future,” said Abdelaziz Oumarrou, a farmer who lives near the city of Midelt. He, like so many others, supports his family from the wheat harvest.

“The harvest is going to be catastrophic; we must change and start doing things differently, such as irrigating,” he added.

As would be expected, the economy is set to suffer a knock-out effect from the drought. Estimates from Centre Morocain de Conjoncture suggest that growth will slow this year to just 1.2 percent—in comparison to 3.8 percent last year—as a direct result of the dry weather.

In January, King Mohammed VI called on the government to do more to tackle the widespread negative effects of the drought. Two sets of measures were implemented to maintain agricultural activity on his orders, protecting both plant and animal resources.

“In accordance with the High Royal Instructions, maintaining balance in rural areas remains a major focus of public policies and influences the series of actions to be taken,” an official source said.