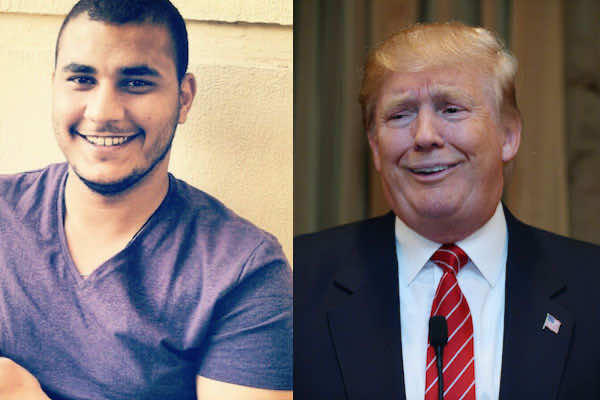 Rabat – A student from Egypt is facing deportation from the United States over posts he made on Facebook about Republican frontrunner Donald Trump.

Elmadeldin Esayed, a 23 year-old student training to be a pilot in Los Angeles, shared a post in February in which he suggested that he would be willing to serve a life sentence for killing Donald Trump, and that the world would thank him for it.

Esayed insists the post was merely a light-hearted joke and an expression of his disgust with comments the politician made proposing a ban on Muslim immigrants. The student stated that he immediately regretted posting the comment.

“It’s just a stupid post. You can find thousands of these every hour on Facebook and the media,” he was quoted by the Associated Press as saying.

“I don’t know why would they think I am a threat to the national security of the United States just because of a stupid post,“ he added.

The Egyptian national was arrested on February 12 by immigration authorities following the post. Instead of charging him directly for the offense, they revoked his residency visa and transferred him to a court for being in the United States “illegally.”

Esayed’s lawyer Hani S. Bushra, says  that this is an “unfair measure,” especially since his flight school is willing to re-enroll him.

“This is an extraordinary step taken by the U.S. government to pressure a school administration to terminate the attendance of someone at their school,” Bushra told website Egyptian Streets.

“Emad never missed a single academic requirement while he was enrolled in the school,” Bushra added.

At a court hearing on March 1 the student again apologized for his mistakes, asking for a bond hearing to request a cancellation of his deportation. The judge denied this after deciding Esayed posed a threat to the community.

“It seems like the government was not able to get a criminal charge to stick on him, so they used the immigration process to have him leave the country,” Bushra told Sky News.