Rabat - Abdelilah Benkirane, head of the Moroccan government, called in security during his speech at the Institute for Graduate Studies in Management in Oujda on Saturday, after a group of teacher trainees began whistling and chanting in protest during the event. 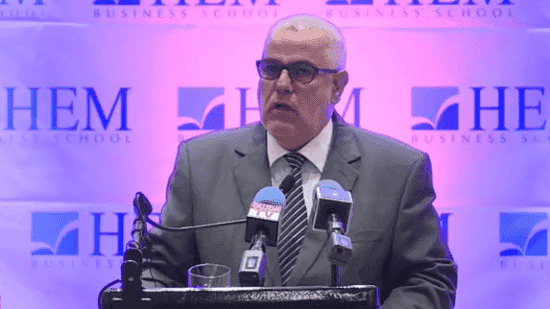 Rabat – Abdelilah Benkirane, head of the Moroccan government, called in security during his speech at the Institute for Graduate Studies in Management in Oujda on Saturday, after a group of teacher trainees began whistling and chanting in protest during the event.

Benkirane told organizers to “understand the government” and called on security officers to escort the protesters outside after waiting for the teacher trainees to become silent and calm the hall.

According to the news source Qushq, Benkirane had explicitly asked the organizers not to have security present at the event, which was officially associated with the Justice and Development Party. However, after the protesters began their chants demanding him to “drop the decrees” that negatively affect the future educators, he called on security to take action.

The decrees mentioned by protestors refer to decrees N: 588-15-2 and N: 589-15-2 which were put in place by the Ministry of National Education and Vocational Training last year. The new policies separate teacher training from actual employment at the end of the program and cut the amount of the training scholarship by half.

Since October, scores of future teachers have been protesting the effects of the two decrees. On December 17, 2015, thousands of teacher trainees and their families reportedly gathered in Rabat for a protest known as the “white flood,” which refers to the white color of the trainees’ uniforms. The event was reported as the “largest peaceful march” in the history of the capital city.

Not all the protests have been safe for the protestors, however. On January 7th, several protesters were beaten by the Moroccan police in different regions of the country; the day is now known to the group as “Black Thursday.”

There are no signs for further rounds of dialogue after a meeting between the protestors’ national coordinating committee and the government on February 4th failed to resolve the conflict.