Madrid  -   In a region plagued by many hotbeds of instability, internal strife and an existential struggle against extremist terrorism, “Morocco, under the leadership of King Mohammed VI, chose its own path and resolved to work towards consolidating its democracy,” Youssef Amrani, Chargé de Mission at the King's Office, said. 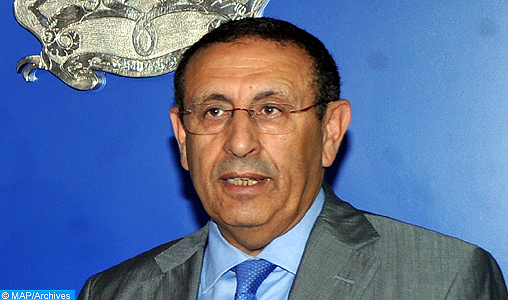 Madrid  –   In a region plagued by many hotbeds of instability, internal strife and an existential struggle against extremist terrorism, “Morocco, under the leadership of King Mohammed VI, chose its own path and resolved to work towards consolidating its democracy,” Youssef Amrani, Chargé de Mission at the King’s Office, said.

“At a time when political transitions evolve in extremely tense conflict situations, Morocco has confidently pressed ahead with its political agenda, endeavoring since the country’s independence to foster a liberal, multiparty environment conducive to strengthening the Rule of law, while displaying a firm commitment to international democratic principles, in full harmony with the country’s traditions of tolerance and openness”, Amrani pointed out in an article entitled “Morocco: a singular path in a troubled region” published on the prestigious Spanish think tank “Real Instituto El Cano”.

The firmer Minister Delegate to the Minister of Foreign Affairs, pinpointed a number of key factors that make Morocco’s democratic path “unique and successful,” including its longstanding commitment to building democracy and its enduring option for modernity, political pluralism and economic liberalism, noting that the new Constitution adopted in July 2011 “enshrined this continuous reform process and gave it a strong impetus, confirming its irreversible nature”.

He also underlined that the advanced regionalization plan, which aims to promote integrated, sustainable economic, social, environmental and cultural development, “reflects Morocco’s commitment to building strong and diversified national economy which can generate wealth, create jobs and achieve social justice for all.”

Amrani highlighted the significant progress Morocco has made in economic development and environmental protection, stressing that “the global vision for the nation’s future is based on the firm commitment to build a social, participatory and inclusive democracy”.

“King Mohammed VI’s clear vision seeks to cover all aspects of human development by promoting, side by side, the two essential pillars that are economic and political development”, referring to several major sectorial strategies such as the Green Plan, the Emergence Plan, the tourism 2020 plan, and structuring projects, including the ‘Tangier-Med’ and ‘Nador West’ ports, highways, express LGV trains, logistics and energy.

As for renewable energy sector, he said that Morocco is pioneering green development and developing a cutting-edge solar technology, referring to the King’s inauguration of the Nor Plant.

In addition, Amrani cited openness to the outside world, an attachment to moderation and tolerance, and a commitment to human development through solidarity-based policies and efficient cooperation as Morocco’s Foreign policy guiding principles.

Regarding Morocco’s African policy, he said that it stems from the deep conviction that the continent needs more mutually beneficial partnerships, as well as human development programs, adding that King Mohammed VI believes that adapted and relevant models of cooperation, which rest on a win-win vision, such as South-South cooperation, will enable Africa to stand on its own two feet.