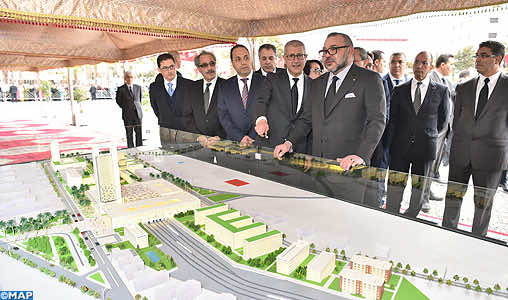 These structural projects, which are in line with the 2014-2018 Rabat Development Integrated Program dubbed: “Rabat City of Lights, Morocco’s Cultural Capital”, illustrate the Sovereign’s permanent will to support the process of urban restructuring and modernization and reinforce intercity mobility.

These two projects, which come to accompany the commissioning of the first line of Moroccan High Speed Train TGV, will help stem travelers’ flow, offer quality services, improve the stations’ functioning, visibility and accessibility, as well as to give new urban impetus around the new stations.

As for the construction of the Rabat-Agdal station, whose first stone was laid by HM the King on Monday, it provides for building new three-level passenger facility (23,000 square meters).

The new stations, which are carried out by the Moroccan national railway office (ONCF) are also expected to generate 500 stable jobs during the exploitation phase.

These projects will turn Rabat-Ville and Rabat-Agdal stations into smart and multi-service spaces that make of railway stations a community space for customers and the large public like the railway compounds of Marrakech, Fez, Tangier and Casa-Port.

On this occasion, Director General of ONCF Mohamed Rabie Khlie handed HM King Mohammed VI two books. The first highlights the achievements made in railway sector during the last fifteen years under the leadership of HM the King, whereas the second retraces the transformation of the railway stations in the Kingdom into multi-service living spaces,