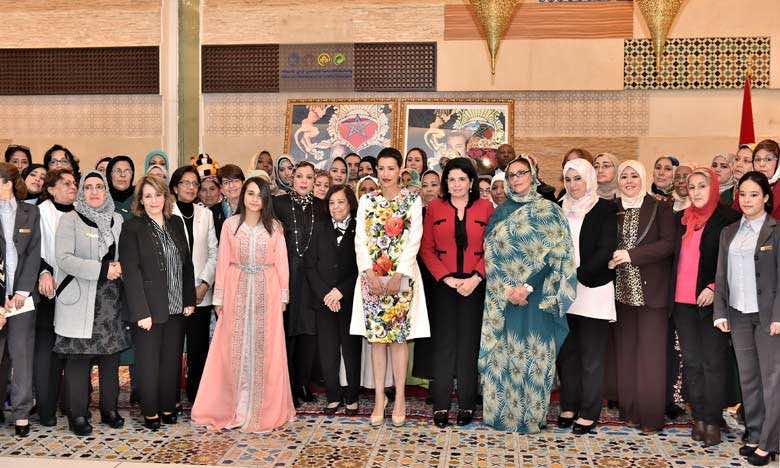 In a speech at the opening of this ceremony, held under the theme “Regionalization: New Impetus to Integrated and Sustainable Human Development”, Farida Khamlichi, UNFM Advisor, commended the choice of the theme for this year’s celebration, which is inspired by the Royal Speech on the occasion of the 2015 Throne Day.

“The regionalization we want for our country must be the outcome of serious endeavors to find appropriate solutions for each region, adapted to its resources, characteristics, potential employment opportunities and development challenges”, Khamlichi quoted HM King Mohammed VI as saying.

She noted that the choice of this theme is also justified by the continued instructions of HRH Princess Lalla Meryem to UNFM to guide its services and activities aimed at enabling Moroccan Woman to enjoy all her rights.

Since its establishment, UNFM has accumulated important experiences, notably in the field of combating illiteracy among women and their economic vulnerability, she noted.

UNFM is also committed to cooperate with bodies concerned with advanced regionalization to help promote the economic and educational conditions of Moroccan woman and empower her to effectively exercise her rights and accomplish her role as active citizen in the public life.

The first agreement, initiated by UNFM President-delegate Rabia Lamrini, and Handicraft and Social and Solidarity-based Economy Fatema Marouane, aims to lay the foundations of cooperation between the two sides to integrate women into the job market, develop her skills and encourage her to join handcraft cooperatives.

The second agreement, inked by Lamrini and Director General of OFPPT and Abderrahim Kadmiri, provides for setting up a framework for common action to achieve projects related to UNFM’s international activities.

The third agreement, which was signed by UNFM President-delegate and Director of Ibn Sina University Hospital Center of Rabat Abdelkader Errougani, aims to provide trainees at Lalla Meryem Center with nursing training.

The fourth agreement, which provides for the support of UNFM’s projects meant to women living in rural areas, was inked by Lamrini and the president of the directorate of Al-Barid Bank, Redouane Najm Eddine.

Signed by Lamrini and Director General of Barid Al-Maghrib, Amine Benjelloun Touimi, the fifth agreement provides for the issuance of a commemorative postal stamp which reproduces painting of Abderrahmane Ouardane who offered it to UNFM on the occasion of the 2015 International Women’s Day on the theme “non-violence culture against women: prospective vision”.

On this occasion, Amine Benjelloun Touimi presented the stamp to Princess Lalla Meryem.

Explanations were also provided to the Princess on Princess Lalla Meryem Center for Social Qualification, which will be established by UNFM in Salé to host women victims of violence.

Princess Lalla Meryem also visited the various stands where revenue-generating projects by women who benefited from professional training at UNFM’s centers were showcased.