Rabat - A plane headed to London from Marrakesh was forced to make an emergency landing after a drunk passenger attempted to open one the emergency door. 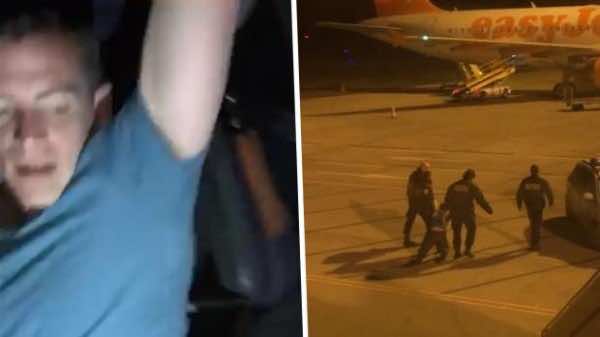 Rabat – A plane headed to London from Marrakesh was forced to make an emergency landing after a drunk passenger attempted to open one the emergency door.

During a flight carrying passengers from Marrakech to London on Monday, a drunk British passenger attempted to open a door on the plane, which forced the pilot to make an emergency landing, according to The Sun, a British tabloid.

The plane, which landed safely at the Bordeaux-Merignac Airport in France two hours after take-off, was 30,000 feet in the air when a man, presumed to be in his 30’s, attempted to open a door on the 180-seat easyJet flight and caused passengers to “panic.”

The Airbus A320 was still 650 miles away from its final destination at the Gatwick Airport when the incident occurred.

According to nearby passengers, the man began drinking alcohol that he had purchased from duty-free stores as soon as he boarded the flight.

“He was drinking rum or whisky,” a witness told The Sun. “Air crew took the bottle off him but it was too late.”

Once the place took off, he allegedly became rowdy, abandoning his seat and pacing up and down the aisles of the plane.

The man’s girlfriend, who was traveling with him, tried to intervene, but he allegedly pushed her.

Witnesses testified that the man continued his disorderly behavior even as “fearful” passengers attempted to restrain him as he walked up to the aircraft’s emergency door attempting to open it.

Once the place landed in France, the gendarmerie, or the French police, boarded the plane while blowing their whistles and proceeded to arrest him.

“He dragged his feet all the way to the police car,” witness Joe Mortell, from Cheltenham, told The Sun.

“Such incidents are rare. We take them very seriously and always push for prosecution,” an easyJet spokesman said.

The French police are still investigating.