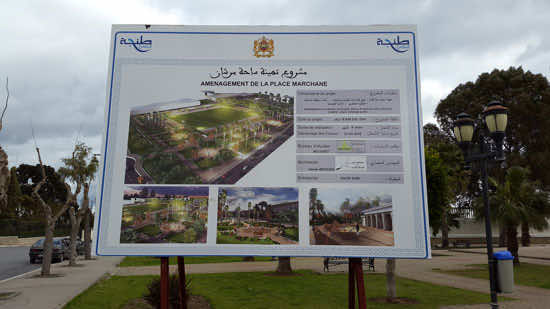 Rabat – The Marchane square in Tangier will witness some radical changes concerning its infrastructure and design by the end of June.

The Med Cop 22 will begin in Tangier after the Eid al Fitr. Organized by the regional council of Tangier-Tetouan Al Hoceima on 11 and 12 July, Med Cop 22 includes the thirty delegations from countries surrounding the Mediterranean as well as countless international organizations.

Hanae Bekkari, the architect in charge of the project was quoted by Media24 as saying: “The Wali wants all the work done before the start of the conference Med Cop 22.”

With over MAD 16.8 Million allocated to cover this project, Hanae has only four months to optimize Marchane stadium. They plan to do so by demolishing its walls and covering the whole view with grass and plants.

Hanae hopes this will recreate a green space that is meant for entertainment for the benefit of people living in Tangier, particularly the children of the neighborhood. In addition, the square will be a part of the royal palace’s gardens.

“I’ve been working on this project since 2013,” said Hanae. “The royal palace’s gardens will be open to the public. Since 2013, I consulted the mothers who come in the afternoon with their children as well as residents of the neighborhood,” she added.

“Furthermore, the Minister of National Education Rachid Belmokhtar was born and raised in this neighborhood. He was the one who drew my attention to the Greco-Roman ruins,” she continued.

Ever Since the games of the Botola were gradually transferred to the stadium of the city in 2012, the access to the stadium has remained open to amateur joggers and marathons.

The enclosure of the stadium contains some of the oldest Greco-Roman ruins and ancient terraces built between 1927 and 1932.

Marchane stadium served as the main sports arena in Tangier until early 2010 with a capacity of 14,000 spectators. It hosted the games of the Renaissance Sportive de Tanger (RSS) as well as the Ittihad Tangier Riadi (IRT) since the 1970s.