Morocco World News
Home Western Sahara Autonomy plan Morocco Should Avoid Confrontation With the UN, Use Diplomacy to Its Advantage

New York - The biased and undiplomatic statements United Nations Secretary General, Ban Ki-moon, made last weekend with regards to the Western Sahara conflict have caused controversy in Morocco and resulted in an unprecedented mobilization of the Moroccan people. 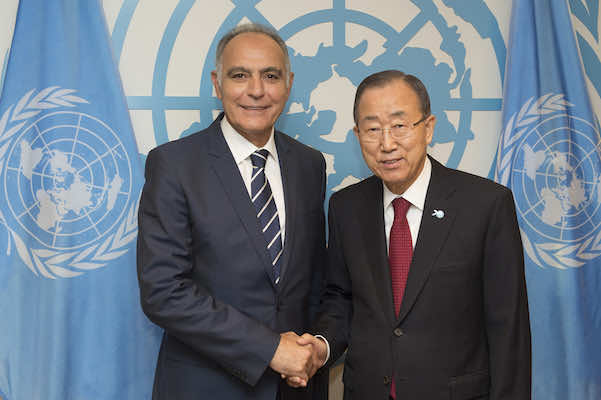 New York – The biased and undiplomatic statements United Nations Secretary General, Ban Ki-moon, made last weekend with regards to the Western Sahara conflict have caused controversy in Morocco and resulted in an unprecedented mobilization of the Moroccan people.

When Ban Ki-moon brought up the question of a referendum for the territory, in total disregard of the political framework set out by Security Council Resolution 1754 passed in April 2007, he not only set the political process back a decade, but he also violated his mandate as Secretary General. His use of the term “occupation” when referring to Morocco’s sovereignty over the territory was incorrect and inconsistent with past UN precedent. This is the first time a sitting UNSG has overstepped the mandate entrusted to him by the Security Council and used a term that has never been used is UN terminology to refer to the status of the Western Sahara.

That Moroccans have reacted to these statements with outrage and protest is understandable and reflects their belief in their country’s territorial integrity, and their determination to fight against all those who are intent on threatening Morocco’s stability.

The communique issued by the Moroccan government denouncing Ban Ki-moon’s unfriendly statements and his bias in favor of one of the parties to the conflict, in a flagrant violation of the scope of his mandate, likewise reflects Morocco’s serious and unwavering commitment to its sovereign integrity.

Morocco should use diplomacy to its advantage

Now that tempers have cooled, the seriousness of the situation requires swift action, foresight, and a proactive approach. Some analysts have overreacted, calling on the Moroccan government to end to its cooperation with the United Nations in the political process the UN has been leading since 1991.

Should Morocco stop cooperating with the United Nations and withdraw from the UN political process? What implications would this decision entail for Morocco in the short, medium, and long term? Or, would Morocco be better off playing the game of diplomacy, acting with confidence, and working to convince the influential powers within the UN and world public opinion that Morocco’s approach is the right one?

The answer is clear. Morocco should steer away from any temptation to overreact to Ban Ki-moon’s statements and, thus, magnify their importance. While the SG’s statements constitute an unprecedented deviation from the political process set out by the Security Council and denote a clear bias in favor of the Polisario, this new twist in the long history of the conflict should not lead one to overlook the fact that, at the end of the day, the UN chief’s job is to play the role of mediator between the parties. It is not to set policy or decide what approach should be followed in order to achieve a mutually acceptable political solution, in line with all the resolutions adopted by the UN main body since April 2007.  Nor should Moroccans forget that Ban Ki-moon will leave his post at the end of the year. It is unlikely that he will have any impact on the political process or effect a change in the Security Council’s framework before he leaves office.

Morocco’s commitment to the United Nations with regard to the territorial dispute in which it is pitted against Algeria and the Polisario requires a wise and forward looking strategy likely to help it achieve progress towards garnering the support of an increased number of countries and convince them that the right way to put an end to the conflict is by means of finding a middle ground solution that saves the face of all parties involved.

Morocco should not use the statements Ban Ki-moon made as an excuse to withdraw from the political process nor to refrain from cooperating with the UN chief’s personal envoy. First of all, as a chief party to the conflict, Morocco is bound by the UN process and cannot reject it. Such a decision could have a negative impact on Morocco’s position on the world stage. In addition, such a step would backfire and could cause Morocco to be isolated at the international level. Such a scenario would constitute the golden opportunity the Polisario and Algeria have been waiting for to accuse Morocco of being unwilling to move the political process forward.

Need to act with confidence and composure

Rather than ending its cooperation with the United Nations, Morocco should instead act with confidence and composure, and use diplomacy to its advantage as it has always done. As the mandate of the UN mission in the Western Sahara comes up for renewal next April and the UN chief submits his report to the Security Council in the coming three weeks, Morocco should avoid direct confrontation with the United Nations. It would be counterproductive for the Moroccan government to refuse to receive the Personal Envoy of the Secretary-General at the end of this month.

To the contrary, Morocco should receive him with due regard and use the same tactics the UN chief and his personal envoy have been engaging in. Whether Morocco receives him or not, Ross has never been and will never be the right person to play the role of impartial mediator. however, he is the designated Personal Envoy. Just as the Moroccan saying goes, one should play with a liar until he is caught by his own lies and Morocco should play by the rules of diplomacy.

Using diplomacy and politics to one’s advantage is an art that requires subtlety, strategy, and sometimes subterfuge. Morocco should act accordingly and avoid giving adversaries any opportunity to claim that it is hampering the political process. At the end of the day, since Algeria and the Polisario have not been able to put any constructive proposal on the negotiating table, all they can wish for is a misstep by Morocco, thus potentially precipitating a call by the Security Council to make more concessions in light of Morocco’s supposed intransigence.

Morocco should deal with the Secretary-General and his Personal Envoy with subtlety and work to win the sympathy of influential countries. Moroccans should not be oblivious of the fact that what matters in this case is winning the support of the Security Council, especially the veto-wielding countries. The more these countries understand the historical facts that support Morocco’s claims to the territory, the stronger Morocco’s position will be.

What is at stake for Morocco is of critical importance for the country’s future, unity and stability, and any decisions should take those fundamental elements into account. Diplomatic decisions should not be made in anger or overreaction. They should rather be made with composure and foresight.

Need to spell out the autonomy proposal

Morocco has everything behind it to win this diplomatic war. It has presented an autonomy plan that has been hailed by the Security Council as “serious, realistic and credible,” while the proposal of the other party received no such support. Morocco also has the historical facts necessary to convince the international community that is defending a just cause. It has the most prominent position at the international level in promoting stability in North Africa and the Middle East, not only for purposes of combating international terrorism, but also for promoting coexistence between cultures and civilizations.  It has been doing so for centuries.

Moroccan diplomacy should no longer limit itself to mentioning Morocco’s autonomy plan in every international meeting. Rather, it should rather spell it out and explain to the international community to what extent Morocco’s position is in line with international law and the relevant General Assembly resolutions on self-determination, especially Resolution 2625 (XXV) of 24 October 1970. Likewise, in order to counterbalance Algeria’s and the Polisario’s accusations that Morocco has exploited the natural resources of the territory, Morocco should tout and publicize in detail the economic projects it has been launching to turn the region into an economic hub and a link between the rest of Morocco and Sub-Saharan Africa. Merely referencing these facts without providing real and concrete data will not be enough to advance Morocco’s position.

What is needed is a forward looking, well thought-out campaign to showcase all the elements Morocco has in its favor to garner the support of the international community and convince the world that the best way forward is the Moroccan autonomy plan.

Morocco should break free from the bygone era of reaction and overreaction. New developments in the conflict, such as the recent diplomatic row with Sweden, the political crisis with the European Union over the agriculture agreement, and the current tension with the UN secretariat, require a more proactive and aggressive strategy in which Morocco uses all its resources to deal a blow to Algeria and the Polisario, weaken them, and force them to compromise.

The Moroccan parliament, Moroccan political parties, and Moroccan civil society should not [work piece meal, or wait for a crisis to hit to continue making routine statements that do nothing to further a resolution. Instead, they should show leadership, creativity, and readiness to work throughout the year, based on a clear strategy with coordination by the government. Political parties and civil society must work together This issue is of such critical importance to Morocco that everybody must be armed with the facts that give credibility to Morocco’s position.

Moroccan diplomacy has matured enough by now to take the right approach that will eventually strengthen Morocco’s position and help it put an end to the conflict in line with its interests in respecting the sovereignty over its territory. King Mohammed VI’s visit to Russia this Sunday is the best tool to secure the support of influential countries and thwart the schemes and stratagems of Morocco’s adversaries.