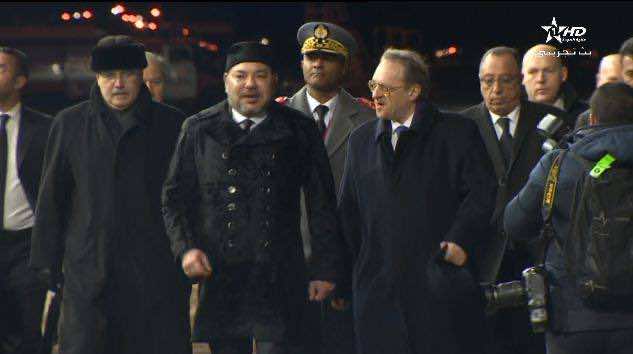 Upon his arrival at the Vnukovo International Airport, the King was welcomed by Mikhail Bogdanov, Deputy Foreign Minister of the Russian Federation and Special Presidential Representative for the Middle East and Africa.

After greeting the national colors to the sound of the national anthems of the two countries, the Sovereign reviewed a military detachment of the three armies (land, sea, air), reserved for distinguished guests of the Russian Federation.

The King, thereafter, was greeted by Valery Vorobiev, Russian ambassador in Rabat, and the heads of Arab and African diplomatic missions accredited in Moscow.

The Sovereign was then greeted by the staff of the Moroccan embassy and representatives of the Moroccan community in Russia before the military detachment of the three armies marched in front of the King.

After a brief rest at the VIP lounge of the Vnukovo International Airport, the royal procession went to the place of residence of the Sovereign.