Taroudant - Following United Nations Secretary General Ban Ki-moon’s recent blunders over the issue of the Sahara, the Jewish Moroccan Community of Toronto, Canada has issued a statement expressing its solidarity with and commitment to Morocco and its sovereignty over the Sahara. 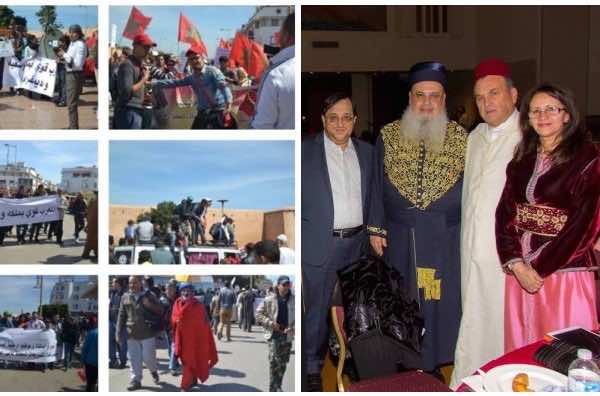 Taroudant – Following United Nations Secretary General Ban Ki-moon’s recent blunders over the issue of the Sahara, the Jewish Moroccan Community of Toronto, Canada has issued a statement expressing its solidarity with and commitment to Morocco and its sovereignty over the Sahara.

In an exclusive press release issued to Morocco World News, the president of the Jewish Moroccan Community of Toronto Simon Keslassy said that the Jewish community in Toronto hails “the peaceful march held Sunday in Rabat” as “a solemn moment to reaffirm loudly that the Sahara was, is and will always be Moroccan and an integral and indivisible part of the territorial integrity of the Kingdom.”

The Jewish community said that “our hearts and our souls are present in Morocco to celebrate with our compatriots this great peaceful and civilized march,” despite the long distance which keeps us apart.

The statement affirmed “Our bonds of fidelity and loyalty to our most respected and beloved His Majesty King Mohammed VI –- May God glorify him — and our unwavering commitment to the glorious Alawite Throne.”

The Moroccan Jews of Toronto said that they remain very attached to “our native country, Morocco,” adding that they are “united and strongly mobilized behind our Sovereign to thwart the maneuvers and conspiracies of the enemies.”

They added that they are all mobilized to defend Morocco’s national sovereignty and ready to defend the very relevant, realistic, and credible initiatives that Morocco has presented to end permanently the issue of the Sahara.

“We made it our patriotic duty to lobby in the new federal government of Canada so that Canada can join the community of nations that support our cause, the Moroccan Sahara.”

During his recent visit to Tindouf and Algiers on the Sahara issue, the UN Secretary General Ban Ki-moon abandoned his diplomatically required impartiality and neutrality and described Morocco’s sovereignty over its southern provinces as an “occupation.”

After Ban Ki-moon’s unprecedented remarks, Morocco organized a march on March 13 in Rabat, where more than three million people from all regions of Morocco marched and raised patriotic slogans denouncing the United Nations Secretary General’s statements regarding the Sahara.

The Moroccan government released a press release expressing its strongest protest against the remarks made by the UN Secretary General Ban Ki-moon during his visit.