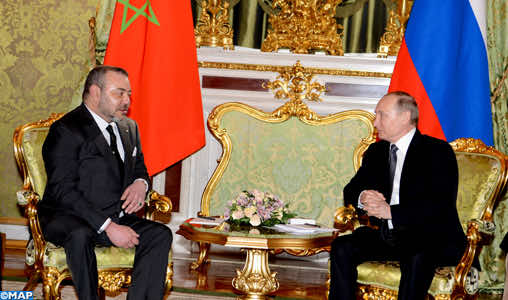 The first agreement covers extradition between the Kingdom of Morocco and the Russian Federation, while the second is an agreement on air services.

The third agreement is a cooperation agreement in the fields of environmental protection and the rational use of natural resources, while the fourth agreement covers cooperation in sea fisheries.

The fifth is an agreement on the promotion and reciprocal protection of investments, while the sixth agreement covers the mutual protection of classified information in the military and military-technical fields.

The seventh one is a declaration on the fight against international terrorism.

As part of the official visit paid by King Mohammed VI to Russia, the two countries signed these agreements:

– A memorandum of understanding on cooperation in the energy field.

– A memorandum of understanding on cooperation in the field of geological research and exploration of the subsoil.

– A memorandum of understanding between Morocco’s National Health Security Office of Foodstuffs (ONSSA) and Russia’s Federal Agency for Veterinary and Phytosanitary Surveillance.

– A memorandum of understanding on cooperation in the field of veterinary supervision.

– A memorandum of understanding on cooperation between Morocco’s Ministry of Endowments and Islamic Affairs and Russia’s Central Religious Organization (Shura Council of Russian Muftis).

– A framework partnership agreement between the National Foundation of Museums and Moscow Kremlin’s Museums.

– A framework agreement on cooperation between the National Foundation of Museums (Morocco) and the Hermitage Museum (Russian Federation).

– A protocol for exchanging information on the movement of goods and vehicles between Morocco and the Russian Federation.

The signing ceremony was attended by members of the Russian government and the official delegation accompanying HM the King.