London - Speaker of the House of Advisors (Higher house) Hakim Benchamach highlighted in London the democratic progress made by Morocco. 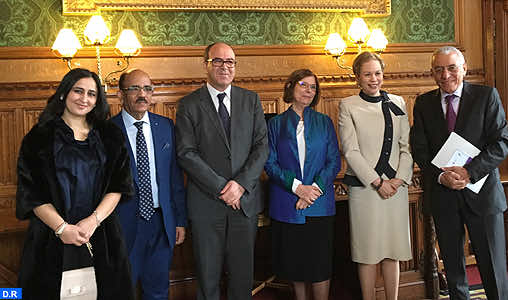 London – Speaker of the House of Advisors (Higher house) Hakim Benchamach highlighted in London the democratic progress made by Morocco.

Speaking during a conference held Tuesday at the British think-tank Chatham House, Benchamach gave an overview of political and constitutional reforms undertaken by Morocco under the leadership of King Mohammed VI.

These inclusive and proactive reforms have enabled Morocco to move forward in the democratization process, he said.

He noted that Morocco’s new constitution expands individual and collective liberties, strengthens the independence of the judiciary and the prerogatives of Parliament and consolidates good governance, gender equality and the role of civil society.

Speaker of House of Advisors also mentioned the impressive large-scale development projects taking place in the kingdom’s southern provinces and which generate growth and jobs.

Benchamach leads a House of Advisors’ delegation on a working visit to the UK.

The delegation also had talks with House of Lords Speaker Baroness Frances D’Souza.