Fez- A video has recently gone viral on social media showing the Dutch football team PSV Eindhoven fans throwing coins of money to Syrian refugees and making fun of them. 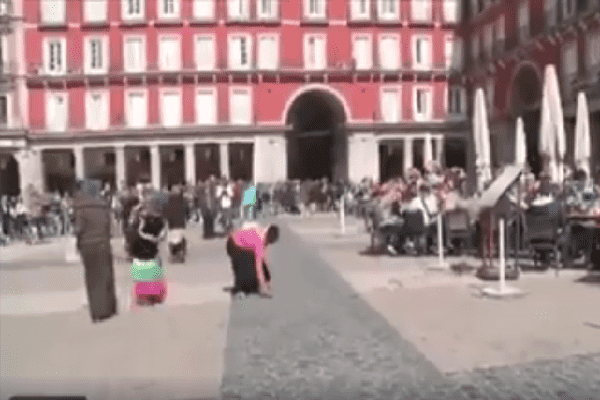 Fez- A video has recently gone viral on social media showing the Dutch football team PSV Eindhoven fans throwing coins of money to Syrian refugees and making fun of them.

Following the football match between the Dutch team PSV Eindhoven and the Spanish team Atletico Madrid, a crowd of Dutch fans chanted and howled with laughter at the desperate refugees grappling and jostling against each other to pick the pieces of money thrown to them. Some fans were filming the scene with their phone cameras and documenting their own moral collapse.

Deeply troubling to the human conscience, the video reflects not only the crisis of Syrian refugees in Europe, but also the crisis in the moral values of PSV Eindhoven fans. Comments on social media deplore such a scandalous act, which reminds us of the dark ages of human slavery.

Some commentators reminded the Dutch fans of the Dutch famine of 1944 known as the ‘Hunger Winter’ when people in the densely populated western provinces north of the Great Rivers starved to death.

It should be noted that the Syrian crisis is one of the biggest crises in the twenty first century. It is estimated that about 9 million Syrians have fled their homes to other countries or within Syria itself escaping the escalating violence, the collapsed of infrastructure and insecurity.

About 4,6 million have fled outside the country to the neighboring countries of Lebanon, Jordan, and Turkey. Many refugees took the route to Europe.