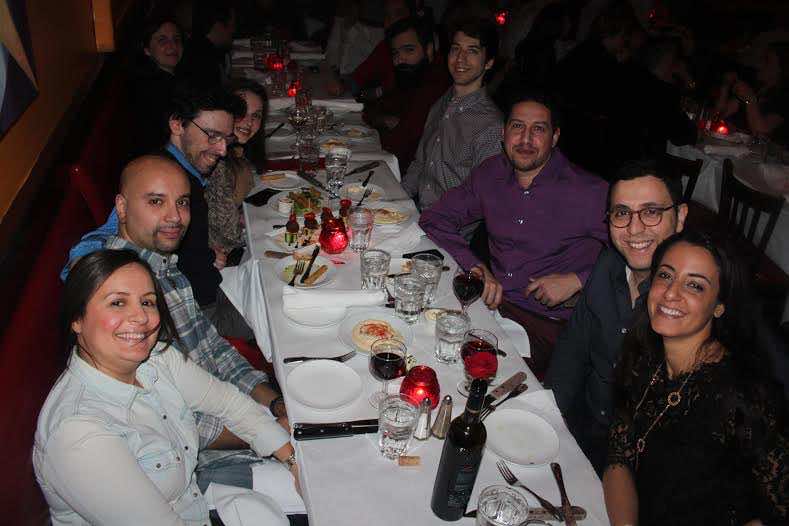 New York – On Saturday March 5, a group of young Moroccan and Jewish professionals came together for our third monthly social outing, which has been bringing together a growing number of people from both communities over delicious food, good music, and even better conversations since the beginning of the year.

From the cozy group of ten, we have grown to a boisterous 23 people, each of whom enjoyed one another’s company at Talia’s, a kosher steakhouse with a Middle Eastern twist. We began our dinner with light-hearted introductions and icebreakers. While we dined on delicious servings of Moroccan salmon, assorted steaks, and lamb-burgers, our conversations became more and more animated. Soon enough, the live band began to play, further energizing our gathering. The repertoire ranged from classics like “Sweet Caroline” and “Piano Man” to Moroccan tunes, whose vivacious melodies roused up the people at the other tables around us. Some of us began singing along.

Many new faces joined our cadre of regulars. By the third meeting, inhibitions had faded, and we all realized that we are all here to stay. More importantly, we believe our social dinners are only going to get bigger and better. We know how to have fun; others see it and want to join. After the dessert, the small talk was forgotten, and we broke up into small groups to discuss issues important to both communities: the development of solar energy, security issues, combating prejudices, free speech, and international politics.

The discussion was not only civil and respectful, but it was genuinely passionate, provocative, stimulating, and inspiring. In today’s divisive political climate, it is easy to launch into a shallow debate with anyone who has access to a keyboard. It is much harder to move past circular arguments based in media soundbytes and have profound conversations about issues that matter. These types of conversations bring about integration and intimacy, rather than alienation and confirmation bias. This dinner marked the point when we started building foundations together – looking forward to a future of many more social dinners, fun musical outings, and great stories, meaningful exchanges, joint projects, fascinating educational opportunities, and cultural exchanges. All of these things help reignite and strengthen the historic bond that the Moroccan Jewish community has had in that country for so many centuries and spread it to other Jewish communities around the world, including, of course, New York.

For me, personally, this dinner was an incredible learning opportunity. I learned about issues that are not generally covered in mainstream US media, yet are central to Morocco’s identity and policy. It was also a particularly meaningful opportunity to voice the perspectives on issues that concern the Jewish community at a pivotal time in history. What we heard and discussed was not something one would get from newspapers, nor from all the nebulous, tightly controlled speeches in politically correct settings. Nuance gets lost in the media, while generalizations and checklists of easily dismissible facts are constantly amplified.  Meetings with friends are not about scoring points, converting others to one’s own political agendas, or making oneself look good in front of an audience. Rather, they are an incredible way of revealing what exists between the lines of politicians’ proclamations and sensational headlines. They are about finding the small details of each other’s lives, examining them with care and curiosity, and delving into the depths of these stories with interest, empathy, and open minds. They are about listening to each other’s needs, dreams, and plans, all in order to create something bigger than the sum of our parts.

In a world where all news seems to be about conflict, division, factionalism, and misunderstandings, our gathering finally was a piece of much-needed good news. We discovered that a plurality of different voices from various backgrounds can come together, not for the sake of a bland uniform chanting, but to build together a beautiful chorus, in which each part is unique and sometimes contrasting, but always plays a necessary role. The music we were listening for the several hours spent in each other’s company was like that – songs from different genres, one after another, creating a fun, diverse, background for everyone. Sometimes, the songs were soothing and harmonious, and sometimes they were upbeat, or tugged at our heartstrings; but, throughout the entire evening, the music helped set a pleasant atmosphere and satisfied a variety of tastes.

We pulled off the polite social masks of banal pleasantries and uncovered the worlds we have yet to explore. We will continue revisiting everything we touched on over more delicious meals and fun outings. But we will also travel along the path of everyone’s own journeys, eventually visiting each other’s communities, learning to speak each other’s languages, and sharing our most precious moments together.  We will weave the different melodies, sometimes harmonious, and sometimes jarringly, yet beautifully cacophonous, into a rich musical carpet. Each note will fall into its rightful place, and each sound will have its moment. We do not yet know which fun and delicious corner of the city our growing caravan will find itself next, but we know that the journey and the mystery of the discovery will be just as enthralling and rewarding as the destination.