Morocco World News
Home Highlights on Morocco Moroccans in US to Stage a Sit-in in Front of UN to...

New York - Moroccans in the United States have obtained the authorization to stage a sit-in in front of the United Nations to protest against United Nations Secretary General Ban Ki-moon has made against Morocco in recent days. 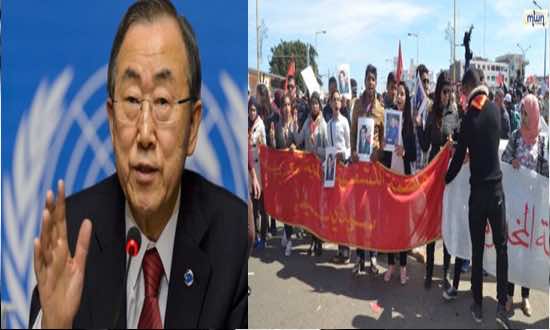 New York – Moroccans in the United States have obtained the authorization to stage a sit-in in front of the United Nations to protest against United Nations Secretary General Ban Ki-moon has made against Morocco in recent days.

According to organizers, the initiative comes to condemn Ban Ki-moon’s bias in favor of the Polisario and Algeria and demonstrate to the international community that the Moroccan people are united for the defense of their country’s territorial integrity, according to press release Morocco World News received on Thursday.

The protest is scheduled for Monday March 21 at 4 pm in front of the main entrance of the United Nations Secretariat located on 42nd street and first avenue in Manhattan.

Morocco and the United Nations Secretary General have been in an arms-wrestling over the past two weeks following the Ban Ki-moon’s trip to the Tindouf camps and Algiers on March 5-7.

During his trip to the region, the UN chief described Morocco’s sovereignty over the Sahara as “occupation.” The unprecedented language used by the UNSG stoked ire of the Moroccan government, and a public outcry all over the country.

On Tuesday March 8, the Moroccan government issued a communique in which it condemned Ban Ki-moon’s statements and accused him of ‘departing from his neutrality and impartiality, and of siding with the Polisario and Algeria.”

Rather than backpedaling and trying to bring the situation under control, the UN chief chose to escalate tension with Rabat and to take things personal, something never seen before in the United Nations.

Following his meeting on Monday with Moroccan minister of foreign affairs, Salaheddine Mezouar, in the United Nations headquarters in New York, BanKi-moon expressed his anger and disappointment with Morocco, following the massive march that was organized in Rabat last Sunday in which three million Moroccans condemned Ban Ki-moon’s stance against Morocco.

During the same meeting, the Moroccan official conveyed to Ban Ki-moon Rabat’s decision to reduce the presence of the UN mission in the Sahara.

In a new twist in the current tension, the Security Council chose on Monday not to back Ban ki-moon in his personal feud with Morocco. Following a closed meeting held on Thursday afternoon, the UN chief received no support from the 15-member body, who decided that the tension is between the UN chief and the Moroccan government rather than between Rabat and the United Nations.