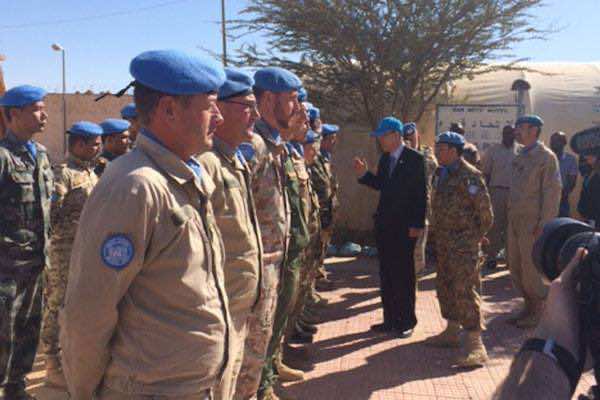 San Fransisco – We have grown accustomed to accusing Algeria of being the root cause of the so-called Western Sahara conflict. These accusations are not without merit.

Many observers contend that the Algerian regime is involved a proxy war against Morocco with no end in sight. What is incomprehensible is that the UN chief, who is supposed remain neutral in the conflict, used the same language the Algerian regime has been using for decades when he described Morocco’s presence in its southern territories as “occupation.”

During his visit to Tindouf, Ban Ki-moon, the UN Secretary-General called on the involved parties to alleviate the plight of Sahrawi refugees who are dealing with an “unacceptable situation.”

For decades, Morocco has called on the international community to pressure the Algerian regime to do just that and open up the gates of Tindouf and free the Sahrawis who have been held hostage there against their will for forty years. These Sahrawis have been used by their leaders, who are under the commands of the Algerian military regime, as a tool against Morocco in the international arena.

If Ban Ki-moon were sincere in his call, wouldn’t the right thing to do be to demand that Algeria stop meddling in the Sahara conflict and let the UN try to solve the problem?

Instead, the UN chief showered the Algerian regime with compliments as if Algeria is merely a simple observer.

The UN chief said that one of his first objectives in visiting the region was to make his own assessment and contribution to the search for a settlement. Why did it take him nine years to decide that this is the opportune time to assess the situation, knowing that he has only few months left in office? What drove him to visit the region but neglect Morocco, one of the main parties in the conflict? Why has he refused to work with Morocco to schedule a visit at a time that works for the country’s leadership?

The answer is not hard to guess. Ban Ki-moon knew ahead of time that if he wanted to visit Morocco, he would not be able to use the word “occupation” or place all of the blame for the disastrous living conditions of the Sahrawis on Morocco. Ban Ki-moon is no rookie diplomat. He knew exactly what he was doing. He knew, as a UN chief, that using the word “occupation” would enrage Morocco and result in the reaction it did. Ban Ki-moon knew, as the head of the UN, that he was not supposed to give a personal opinion siding one party of the conflict. Despite knowing all of this, he did.

Ban Ki-moon denounced Rabat’s “disrespectful attacks” on him and on the UN. With this statement, the Secretary-General tried to convey to the world that Morocco is not only working against him personally but also against the entire UN.

The Secretary-General promised the Polisario that he would bring their issue to the front burner. Because of this, it would be naïve to think that refusing to calm tensions with Morocco is not a calculated move. As a matter of fact, this very likely could be his way of fulfilling his promise to the Polisario before leaving office.

This is not the first time that the UN chief came up with a plan that would never be acceptable to Morocco. Observers remember when he tried to include human rights monitoring in Morocco’s southern provinces in one of his recent reports.

Needless to say that assigning Christopher Ross, the previous US ambassador to Algeria, to be his personal envoy is just further proof demonstrating that the Secretary-General was never going to be even-handed. Algeria is a main party in the conflict. Would Algeria and the Polisario accept Marc Ginsberg, former US Ambassador to Morocco, as a UN envoy?

Moroccan decision makers have been playing defense since the beginning of the conflict. They wait and hope for the problem to dissipate, or, better yet, they dream that one day the Algerian regime will come to its senses and offer a solution that will benefit the people of Morocco and Algeria.

Morocco has been a strategic and steadfast ally of the US, France and the Gulf countries. In return, these countries make the usual ambiguous statements of support for Morocco. This is certainly not enough considering all that Morocco does to help to its friends. Morocco works with the US in its fight against terrorism, serves as a business haven for France and supports Saudi Arabia militarily in its recent ventures in the Middle East.

Morocco should make these so-called friends earn its support. Morocco can no longer can afford to fight this fight alone.  When the US learned of the discord between Ban Ki-moon and Morocco, the US State Department issued the following statement: “We support the work of the UN Secretary-General’s Personal Envoy for the Western Sahara and the mandate of the UN Mission for the Referendum on Western Sahara (MINURSO).”

This is not helpful. This statement sounds more like support for Ban Ki-moon than for Morocco, a staunch ally of the US.

Morocco should also stop making statements that it cannot follow through on. Just days after the Moroccan foreign minister Salaheddine Mezouar said that Morocco was considering withdrawing its peacekeeping troops from UN missions, he reversed his statement. The foreign minister indicated that Morocco decided against withdrawing its 2,100 peacekeeping troops from UN missions, dropping the initial threat. This flip flop will surely be seen as a sign of panic and weakness by both Morocco’s friends and its foes.

One thing is sure: Ban Ki-moon is not going to relent or give up on fulfilling his promise to the Polisario and Algeria. He seems adamant about painting Morocco as the wrongdoer in the conflict. He has already cancelled his visit to Morocco, and his upcoming report will undoubtedly be very negative toward Morocco. Let’s hope that Morocco’s decision makers are up to the task and do not wait until the UN chief’s report is out.