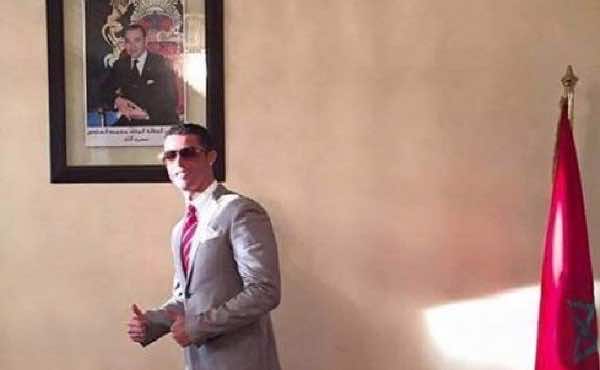 By
Larbi Arbaoui
-
Larbi is a freelance writer and assistant editor at Morocco World News.
Mar 21, 2016

One of the photos with the most shares and comments is that of the Real Madrid striker raising his thumb under a poster of King Mohammed VI.

Wearing a suit, the Portuguese football player smiles near the Moroccan flag in what appears to be a reception hall at an administrative office or hotel.

Lahcen Haddad, Minister of Tourism, also shared the photo on his Facebook timeline, with the following caption: “Cristiano recently in Marrakech. Welcome Ronaldo in the ochre city.”

The three-time Ballon d’Or winner posted several pictures of himself, wearing the same suit, with his Moroccans fans in Marrakech.

Back to Madrid always in style????

After Ronaldo’s frequent visits to Marrakech made international headlines, Real Madrid’s president, Florentino Pérez, decided to ban the player from travelling to Morocco.

However, the Portuguese star defied Pérez’s decision, and continued to make regular trips to Marrakech.

In the last three months of 2015, Ronaldo travelled up to four times a week to Morocco at the end of his training sessions with the Blancos.

Amid the confusion surrounding the Real Madrid striker’s frequent visits, the president of King Mohammed VI’s Fans Association, Mehdi Benkirane, revealed the purpose behind Ronaldo’s many trips to Morocco.

Benkirane said that Ronaldo is planning to build the a first-class hotel for international celebrities in Marrakech.