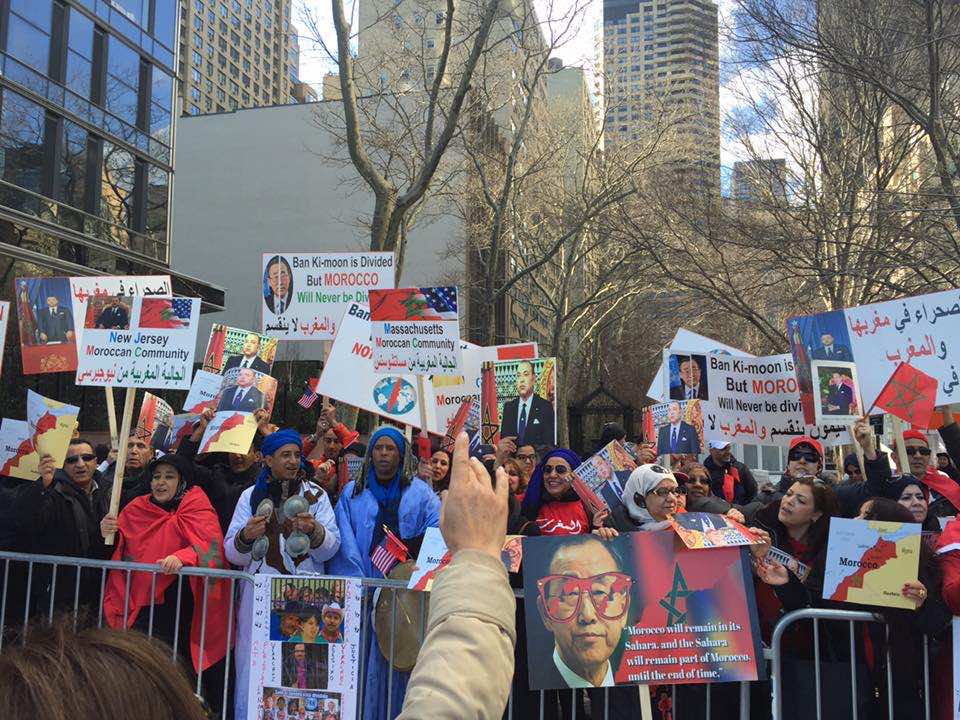 New York – Today, March 21, thousands of Moroccan-Americans, including members of the Moroccan Jewish community, gathered outside the United Nations in New York to protest comments made by UN Secretary-General Ban Ki-moon earlier this month during his visit to the Tindouf camps in Algeria.

Ban Ki-moon stated that the Sahara is under Moroccan “occupation,” offending Moroccan people who criticized the leader for showing bias in a conflict in which the UN claims a neutral position. It is very clear that Ban Ki-moon showed favor for the Polisario’s false narrative on the so-called “Western Sahara.” Although more countries are recognizing Morocco’s autonomy plan as the only real, credible solution to the long-standing conflict, Ban Ki-moon’s poor choice of words reflects his inner belief that the Sahara is not really Moroccan.

His comments show his failure to recognize Moroccan history and respect Morocco’s right to sovereignty over its historical lands. Furthermore, the controversy has tarnished his image in the eyes of many, especially among Moroccans who believe he no longer holds credibility in regards to the Sahara conflict.

Ban Ki-moon was certainly surprised to see millions of Moroccans come to the streets to rally for the Moroccan Sahara in Rabat as he expressed disappointment in this “personal attack” against him.

Meanwhile, the Moroccan diaspora has held rallies to express support for their brethren in the homeland and to defend Morocco’s territorial integrity from Tangier to Lagouira.

Today, we, once against, witnessed this strong connection that Moroccans abroad maintain with Morocco and its national cause when numerous Moroccans descended on the UN in New York to tell the world that the Sahara is Moroccan and that the Moroccan diaspora is not apathetic about this cause.

The purpose of this rally was to show the unity of Moroccans worldwide regardless of political, ethnic, and/or religious affiliations. This unity is a message to the world that Moroccans are ready to mobilize for their Moroccan Sahara.

The rally served as a reminder of the important role that the Moroccan diaspora plays in promoting and representing Morocco to the international community. It also served as a wake up call to Ban Ki-moon that his irresponsible comments will not go unnoticed. The Moroccan people are awake and they will keep demonstrating their pride despite those who wish to undermine their position.