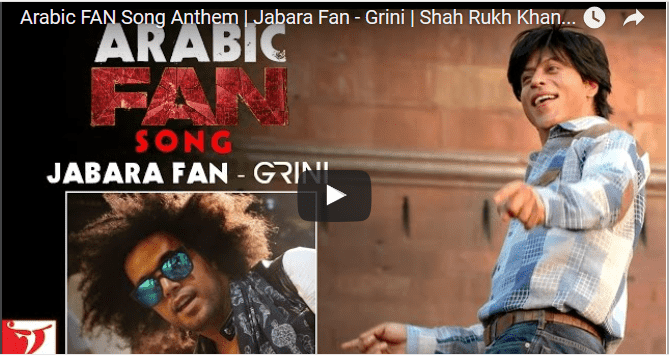 The song, titled “Jabra fan,” has been recorded in several other Indian languages, including Bhojpuri, Gujarati, Punjabi, Bengali, Tamil, Telugu, Marathi and Hindi. The Arabic version of the song was posted to Yash Raj Films’ official YouTube channel last Friday.

On the same day, “King Khan” introduced Grinni onstage at the Times of India Film Awards in Dubai and joined the the 31-year-old artist as he performed the song live for the first time. Grinni, originally from Marrakesh, wore a black and orange sherwani at the awards ceremony.

“Fan” tells the story of Guarav, a young boy from Delhi who decides to travel to Mumbai in order to wish his favorite actor, Aryan Khanna, a happy birthday. Shah Rukh Khan plays the roles of both Guarav and Aryan in the film.

The film is scheduled to be released on April 15th of this year.

“Jab Tak Hai Jaan,” his latest film at the time, was also screened at the festival.