Rabat - Dustin Wynn, a college student from San Diego, conducted a social experiment to see how difficult it would be to get average Americans to go along with Trump’s proposals to monitor all Muslims and shut down “radical” mosques by implementing unspecified spying “systems.” 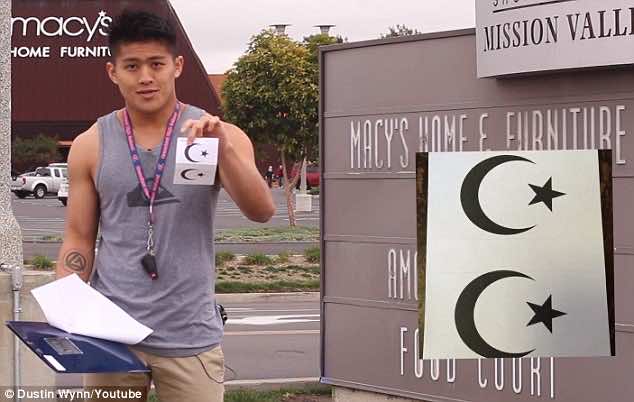 Rabat – Dustin Wynn, a college student from San Diego, conducted a social experiment to see how difficult it would be to get average Americans to go along with Trump’s proposals to monitor all Muslims and shut down “radical” mosques by implementing unspecified spying “systems.”

The 20-year-old, who is interested in film and psychology, along with his friend Peteros Mekonnen,19, took to the street, asking pedestrians if they would hand out crescent-shaped badges to their Muslim neighbors, with the promise that Donald Trump’s campaign would pay them $20 per sticker.

Shockingly, many of the interviewees in California were willing and even eager to do so in return for the small sum of money.

In Wynn’s video, one of those who accepted his offer boasted that he knew where he could find Muslims.

Another person told Wynn, “Of course, I was in the Marines. I fought against them.”

In an exclusive interview, Wynn described the disturbing ease of recruiting average Americans to hunt down Muslims.

“Many people gave me a stink-eye when I said I worked for him, then their hate disappeared when I told them about the money,” he said.

Speaking about the social experiment that he dubbed the “Hitler experiment,” Wynn said that he wanted “to see if people would act like Nazis if they were paid to.”