Rabat - Members of the Moroccan military have been training with the U.S. Marines in Kenitra in order to build the kingdom’s demining capabilities, according to the Marines’ official website. 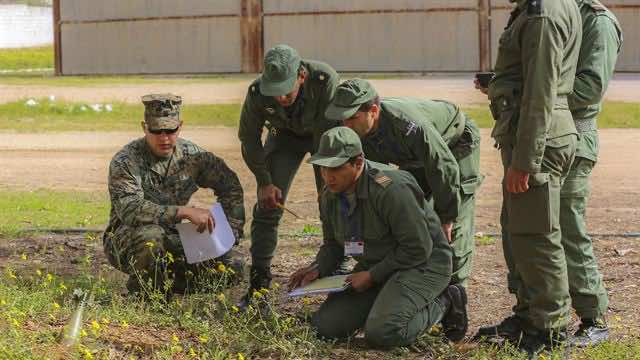 Rabat – Members of the Moroccan military have been training with the U.S. Marines in Kenitra in order to build the kingdom’s demining capabilities, according to the Marines’ official website.

The five-week training program is part of the U.S. Humanitarian Mine Action Program, which has assisted partner nations in developing their demining capacity since 1988. The program is designed to educate fellow nations on removing explosive remnants of war in post-conflict areas to prevent future human suffering.

According to the website, the trainers – part of the Special-Purpose Marine Air-Ground Task Force Crisis Response-Africa team based in Italy –  began their work with the Moroccan military on Feb. 22, at the request of and in coordination with the U.S. Embassy in Rabat.

The Morocco Wall – built by the Moroccan military to keep out the Polisario Front after a 16-year war with the separatist group – is currently the world’s longest continuous minefield.

The Landmine and Cluster Munition Monitor, a website that monitors progress in eliminating landmines all over the world, reported that mines killed 544 people and injured 1.643 others in Morocco from 1975 through July 2008.

Though Morocco – as well as the United States – did not sign the 1997 Mine Ban Treaty, which bars signatory countries from using, producing or stockpiling mines, the country reported in 2009 that its forces had cleared 564 square kilometers of mines and other related materials.

Staff Sgt. Phil Mayer – one of the trainers in the program in Morocco – said he is impressed by the hard work and progress made during the training.

“Their performance during this training revolution has been outstanding. The students are very receptive and motivated,” Mayer said. “They have a lot of drive and initiative to learn all the material we’ve been giving them and they are retaining all the information. This is by far the best experience I’ve ever had training with a foreign military.”