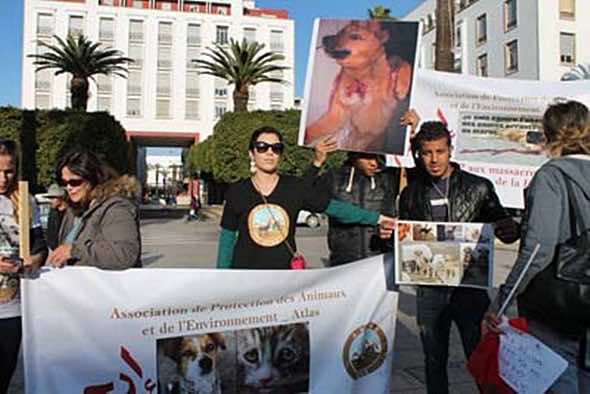 The video caused a outcry of disapproval among defenders of animal rights. Many people denounced this act through an online petition calling for the immediate cessation of the shooting. Furthermore, a protest was organized on Friday in front of Parliament.

Afaf Al Harmouchi, head of “Assad,” an animal welfare association in Morocco, said that the authorities’ decision is irresponsible and irrational, pointing out that authorities must protect every single living being.

She added that this decision is damaging to Morocco’s image internationally and sends negative messages to the younger generation, who may start to believe that killing dogs is normal and permitted.

She also explained that neither Islam nor legislations approves killing an animal in such a “brutal and unhuman” way. She then added that no matter how many stray dogs the authorities kill, they will continue to breed.

“The municipal council of Ksar Lkbir and other cities that follow the same way might face bankruptcy because the huge amount of money spent on bullets and guns. Meanwhile, they could fund a shelter for these animals in the suburbs with a lower budget,” she clarified.

Besides, the space is meant for everyone, and nobody has the right to take animals’ lives. European countries and America understood long ago that the balance of life can only be realized with the presence of all its components.

She also criticized the lack of punishment against people who abuse pets and animals in general, by calling for a law that protects against any kind of animal assault.