Rabat - Late Monday, a fire spread quickly up a high-rise tower in the United Arab Emirates city of Ajman, which is home to the world's tallest building. 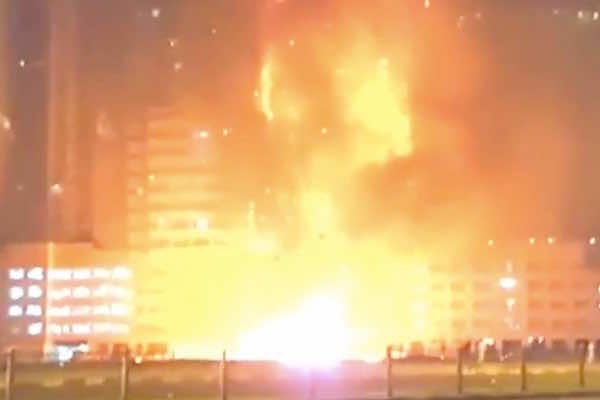 Rabat – Late Monday, a fire spread quickly up a high-rise tower in the United Arab Emirates city of Ajman, which is home to the world’s tallest building.

According to Gulf News, the fire broke out in the 30-storey Ajman One apartment complex in the city of Ajman, on Monday at around 9.45pm, local time.

In a video shared widely across social media, flames were seen rising up the side of the skyscraper in Ajman, as debris fell to the ground below.

The same source cited Brigadier Shaikh Sultan Bin Abdullah Al Nuaimi, Commander-in-Chief of Ajman Police, as saying that five people had sustained minor injuries and were treated at the site. Also, a pregnant woman was rushed to Shaikh Khalifa Hospital as she was suffering from impaired breathing.

The residents managed to evacuate their apartments before the fire got out of control, but later the blaze had “gutted at least three towers in the Ajman One residential cluster.”

Ajman Civil Defence tweeted early Tuesday morning that although the fire had been contained, the cooling process was still underway.

The recent incident is the latest in a series of blazes to hit skyscrapers in the Gulf nation.

This past New Year’s Eve, the 63-storey Address Hotel, one of Dubai’s most prominent hotels, was engulfed in a large fire.

In Ajman, firefighting efforts continued late into the night at the residential building, while the authorities opened an investigation to find out the cause of the fire.