Rabat - A selfie taken last year by a Syrian refugee with German Chancellor Angela Merkel recently went viral after the refugee was incorrectly identified as Najim Laachraoui - one of the Brussels bombers. 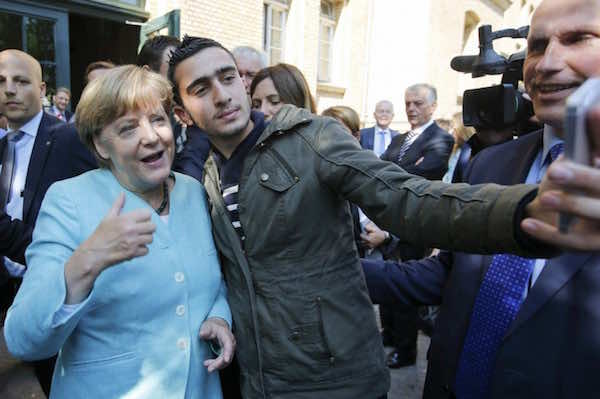 Rabat – A selfie taken last year by a Syrian refugee with German Chancellor Angela Merkel recently went viral after the refugee was incorrectly identified as Najim Laachraoui – one of the Brussels bombers.

Fleeing violence in Damascas, the refugee – Anas Modamani – arrived in Germany in September 2015 after fleeing violence in Damascus. News of the chancellor’s visit swept the Berlin refugee camp in which the 19-year-old lived. During the visit, Modamani took the a photo with Merkel and posted it to social media, thinking little of the reception it might get, he told Deutsche Welle.

Months later, the photo resurfaced after someone posted it online with a caption suggesting that man in the picture – who is, in fact, Modamani – resembles Laachraoui, the suicide bomber that killed several civilians in an airport in the Belgian capital last week.  Other social media posts said the “striking likeness” between the two men proved the Laachraoui had been “posing as a refugee” in Germany before the attack.

According to Modamani’s friends,  the claims are “lies with absolutely no basis.” They added: “He lives in Berlin with his German family, he goes to school everyday, it’s not even possible for him to go to Brussels. Unfortunately, these lies on the internet spread very quickly with no truth to them.”

Tensions are growing in Germany in regards to Merkel’s policy of consistently welcoming refugees. In 2015, more than a million refugees entered the country and more than 100,000 have thus far in 2016.  Earlier today, Sky news reported new proposals in the German legislature that would force refugees to become better assimilated in German society.

The proposed measures include revoking protected status from refugees refusing to learn German or preventing their female relatives from being employed.