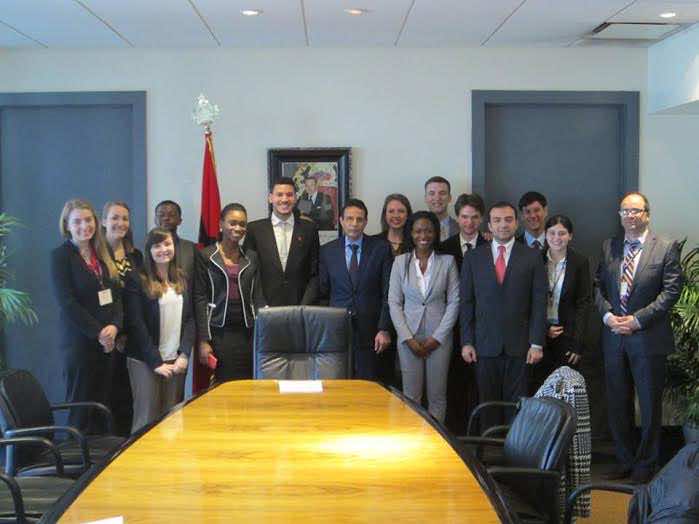 New York – A delegation of students from Eastern Michigan University representing the Kingdom of Morocco was among over 5000 other delegates at the Model United Nations conference held in New York city on March 20-24. 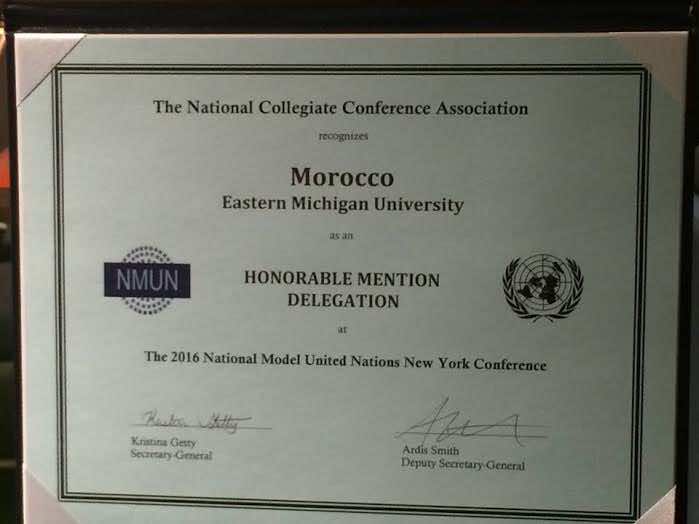 The Model UN is a program in which students learn about global issues and conflicts then provide solutions to a plethora of world problems, all while learning the inner-workings of the UN itself. This platform gives the opportunity to learn about diplomacy, negotiations, and collaboration in the international system. In this year’s conference, the 12 students of Eastern Michigan University represented the Kingdom of Morocco.

The delegation prepares for the conference over the period of 4 months of intensive work. The students do research and learn about Morocco in depth including its history, foreign and domestic policies, and what diplomatic strategies Morocco uses in negotiations over agreements.

Outside the conference sessions, the students of Eastern Michigan University had a meeting with Mr. Abderrazzak Laassel, the Deputy Permanent Representative at the Mission of Morocco to the UN. During the meeting, the delegation was able to get answers in different areas regarding Morocco’s foreign and domestic policies. One of the main areas discussed was the Sahara issue where Mr. Abderrazzak Laasel updated the delegation about the recent position of the Secretary General Ban Ki-moon on the Sahara and what has been Morocco’s response to the matter.

Professor Richard Stahler-Sholk and Ebrahim Khalifeh Soltani are the faculty mentors for the delegation. They helped students throughout the entire process of research and conference days, as well as providing them with diplomatic training. Mosab Ameur alumni of Eastern Michigan University in the field of International Affairs, who is an international student from Morocco, gave support to the students by answering their questions throughout their research and gave a presentation about Morocco with the focus on Sahara issue.

With the hard work of students and the support of faculty mentors, the delegation ended its conference in high standings. They were awarded an Honorable Mention from the National Collegiate College Association (NCCA) for their outstanding representation of the Kingdom of Morocco at the conference.