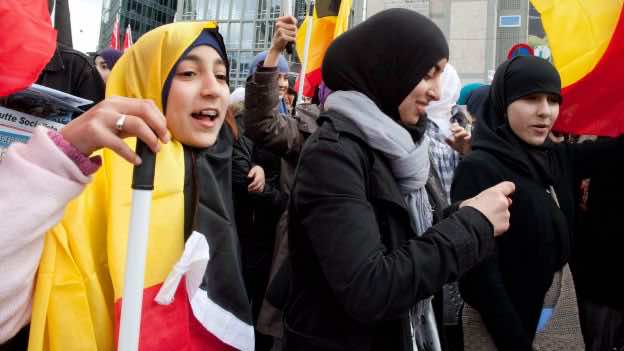 Rabat – From the chic area of Avenue Louise in Brussels, you can take either the Metro 2 or 6 and reach the lower part of Molenbeek, a less fortunate commune where the majority of residents are of a migrant background.

The first impression you get upon leaving the station is feeling that you are perhaps in one of the densest neighborhoods in Morocco; with better infrastructure of course. Signs, menus, and even music are mostly in Arabic.

In the middle of the day you can spot young people in their 20s and 30s having their first cups of coffee with a cigarette in one hand and a smartphone in the other. Later in the evening, after sunset, you will begin to notice fewer women and more teenagers wandering around in the mostly empty streets.

A few weeks into my stay in Brussels, I couldn’t help but explore this place. I knew no one in the area so the way I presented myself was crucial. I am an exchange student staying in Brussels for a few months, but after several visits to mosques and a few chats with locals in various grocery stores, I learned a lot about their lives and their perceptions of their host country.

People were willing to interact with me on almost every issue I raised with them. My technique of engaging with them on their terms allowed me to have many conversations without being shut out.

After many interactions and exchanges within the community, I was able to form a good idea about the general opinions of the people living there. I do not claim my method to be scientific. Rather, it is merely an interaction with a number of people ranging from 25 to 45 years old; the majority of whom having moved to Belgium from Morocco.

In a certain sense, I believe this demographic to be the most relevant; if their situation is not understood and dealt with in the best way possible we will likely witness the same sort of errors that happened with the first generation of immigrants during the 70s and 80s.

After a number of interactions, I felt a sense of dissatisfaction in their discourse about their living conditions. There is a strong notion of ‘Us’ and ‘Them’ amongst the people, with many relating personal experiences which are far from meeting desired expectations. Hassan, a 26 –year-old trained electrician, explains that just living in Molenbeek itself is an obstacle to getting a job.

Alongside socio-political factors, I state three main issues which play a crucial role in the disintegration of this demographic.

The first factor is misconception. It is a pre-immigration demeanor amongmany people who dream of crossing the border to Europe in pursuit of a better life, for themselves and their families. During the 80s and 90s, Moroccans from the first generation of immigrants would return home for summer vacations, clearly expressing impacts from the economic prosperity they’d found in Europe.

Driving brand new cars, owning several houses and bringing gifts to relatives were all symbols of prosperity and objects to be achieved once escaping the old continent.

This belief is not only held among the uneducated lower class citizens; but also among young, middle class, educated people within the society.

After 9/11 things started to become gradually more difficult for new arrivals to Europe; no longer were they received with open arms. Hostility towards migrants began to grow, as they came to be considered potential threats to European security.

After the economic crisis, the sharpness of the hostility reached its highest level as the far right used terrorism and economic difficulties to promote anti-immigration sentiments among western society.

The 2014 European Parliamentary elections, where these far right parties flourished, is a clear example of the general sentiment towards migrants. Owing to setbacks dispensed by the host country, the migrant community responded by creating its own micro society.

The second factor is what I call ‘civilizational superiority’. It is a certain feeling expressed among the majority of immigrants, and particularly in more recent arrivals. It is based on the idea that whatever a “white person” does or says is better, and cannot be competed with.

The issue can be traced back to their home country of Morocco, where all local things are perceived to be inferior, cheaper quality, or less effective than their western counterparts.

On the local news it was common to hear stories of experts traveling from abroad to help the Moroccan people or teach the Moroccan experts about things they were unable to do on their own. Growing up in that kind of environment, people began to develop the disposition that what was western was better, with only a few exceptions here and there. That same sentiment can be felt in Molenbeek, where people tend to live confined within the area.

There they are comfortable, feel understood, and can easily survive without having to leave the commune. Most of these people make a living from trade and services; like shops, cafes, fast food restaurants, etc…

The gap between immigrants and native Europeans has widened due, on one hand, to the lack of confidence and self-esteem expressed by the immigrants; and on the other by fear and lack of trust from native Europeans.

The third and final factor that I have found to be crucial to the disintegration is the leadership of the Muslim community. It doesn’t take long to realize that those who are in charge of a number of Muslim organizations are elderly people from the first generation, who find difficulty communicating in the host country’s language.

These people represent different ideologies and political beliefs, however, things they do not actually represent are the community itself and the concerns of its citizens.

Competition over power and public support are what really drives them.

Furthermore, the discourse they preach is increasingly removed from what is helpful to young people who hope to better integrate into their host country. It would be no exaggeration to suggest that it might be in their favor, and the favor of those who fund them, for this status quo to remain as it is. What are their motives for maintaining the status quo? The answer to that question I will leave for you to discover.