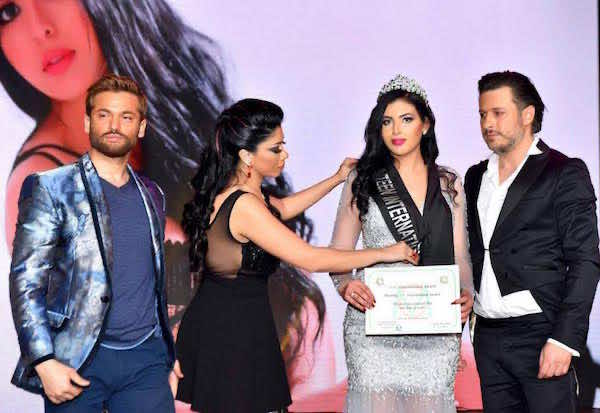 By
Mary Mimouna
-
Mary Mimouna is a freelance writer, and an American educator and reading consultant living in Morocco since 1993.
Apr 1, 2016
Spread the love

Marrakech – Riem El Kadiri, a 16-year-old Moroccan teenager from Marrakesh, has won the world title in an international beauty pageant held on March 5 this year in Beirut, Lebanon. This year’s competition had 21 girls from different countries, with viewers from all over the world calling in their votes.

“When I first entered this contest, I never dreamed I would win! When the director called us to fly to Lebanon because I was one of the four finalists, I just couldn’t believe it. I felt excited on the plane, and it was the first moment I began to think that maybe I could win! We arrived two days before the actual soiree. Since winning, I’ve been doing live interviews for TV channels, and photo shoots for magazines.” Other finalists were from Ukraine, Venezuela, and Iran.

Riem never participated in any beauty pageant before. “I only entered at the urging of my mother and other people in Lebanon (where we had gone on vacation a few months ago), who kept telling my mother, ‘Your daughter should participate! She is so beautiful; she really has a chance of winning.’ My mother has always been my biggest supporter. She told me I was beautiful, but I until now, I thought she said that just because she was my mom!”

Riem’s evening gown was especially designed for her by a designer in Dubai, named Earnest, who has his own shop. Riem’s aunt lives in Dubai and is a designer herself, and located Earnest. Riem’s hair and makeup were done at Pacci and Lucci, a famous hair and beauty salon in Beirut.

Cindy McCain, one of Riem’s teachers at the American School posted on Facebook, “One of my students…So poised for a 10th grader. We recently did a project on human rights and the topic she chose was child abuse, which she discusses (in the television interview). We are all so happy for her.”

Riem lived in Agadir before moving to Marrakesh when she was eight years old. Since that time, she has attended the American School of Marrakesh. Riem enjoys traveling and learning about different cultures, as well as learning new languages. She is fluent in three languages–English, French, and Arabic. Riem participates in theater, and likes horseback riding and playing tennis. She adores fashion in clothing. Riem loves animals and has three cats. She is a serious student who hopes to study politics and make a positive change in the world. Riem participates in Model UN and is concerned about child abuse and the rights of children as an international issue.

Riem has some words of encouragement for girls who are going through challenging times in their own lives. “Some people only associate with a small circle of friends, which keeps them from taking advantage of new opportunities. Everyone needs to be open to meeting new people and participating in new activities. If you can, travel and meet new people. Don’t allow negative people to have power over you. Just believe in yourself and in your own talents. Associate with supportive, successful people, and you, too, can become a success.”