New York - Liu Jieyi, China's Ambassador to the United Nations told the press on Friday that the Council would renew MINURSO’s mandate “without complications.” 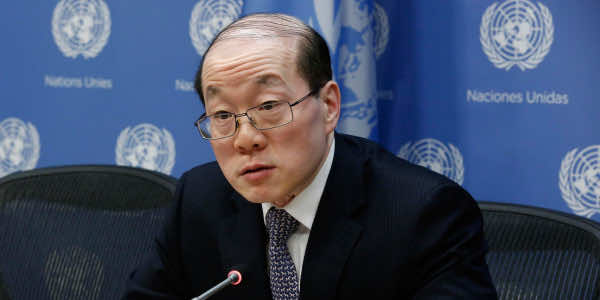 New York – Liu Jieyi, China’s Ambassador to the United Nations told the press on Friday that the Council would renew MINURSO’s mandate “without complications.”

The UN Security Council is scheduled to receive United Nations Secretary General’s annual report on “the situation in the Western Sahara” next Friday April 8.

Based on the report, the UN body will decide by the end of the month whether or not to renew the mandate of UN Mission to the Western Sahara, known by its French acronym as MINURSO.

This year’s examination of MINURSO’s mandate comes against the backdrop of an unprecedented row between Morocco and the UN Secretariat following Ban Ki-moon’s statements in the Tindouf camps in Algeria last month when he described Morocco’s presence in the Western Sahara as “occupation.”

Rabat vehemently to the UN chief’s biased statements, and expelled 84 members of the civil component of MINURSO.

Amid the unabated tension between Rabat and Ban Ki-moon, the Chinese Ambassador to the United Nations, who took over the presidency of the 15-member body, sent a reassuring to Morocco on Friday.

The renewal of MINURSO’s mandate “will be done without complications. We think it is achievable,” he told the press on Friday.

“Our ambition, as President of the Security Council, is that the theme will be resolved smoothly” and that in the end “there will be a renewal of the mandate of MINURSO,” he added.

Analysts say despite the efforts Ban Ki-moon and his personal envoy, Christopher Ross, will make to lash out at Morocco and call on the Security Council to change the framework of negotiations set out in Resolution 1754 of April 2007, the members of the UN executive body have no interest in escalating tension between Morocco and the UN Secretariat.

“Morocco has good and balanced relations with the five permanent members of the Security Council, and none of them will be tempted to impose any other framework of negotiations to Rabat,” a Syrian political analyst who works with an Arab mission at the United Nations told Morocco World News.

“Despite ban Ki-moon’ attempts to prove the contrary, the Western Sahara is not high on the agenda of the Security Council, and it is unlikely that its members will deviate from the rule of consensus that has been followed in voting for the renewal of MINURSO’s mandate,” the UN expert, who asked to speak on the condition of anonymity, added.

The United States is the penholder of the resolution on MINURSO. Following the submission of the UNSG’s annual report, Washington drafts the resolution in coordination with the other members of the Group of Friends of the Western Sahara, which includes France, Russia, the United Kingdom and Spain.