Rabat - In 2013, the Instagram account “Followmetraveller” went viral for its picture series showing a woman taking a man’s hand and leading him through some of the world’s most recognizable and iconic landmarks. 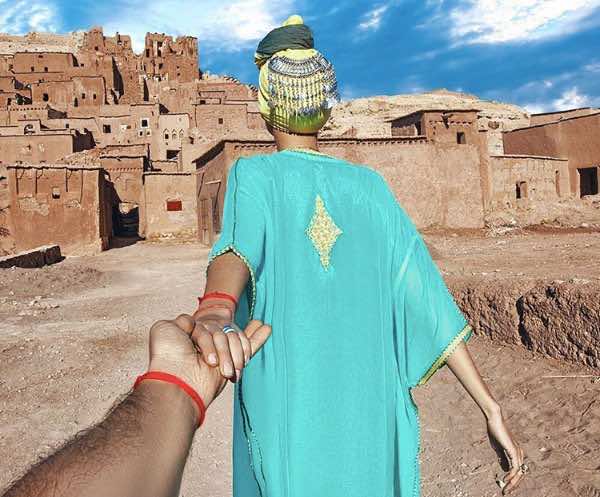 Rabat – In 2013, the Instagram account “Followmetraveller” went viral for its picture series showing a woman taking a man’s hand and leading him through some of the world’s most recognizable and iconic landmarks.

As Forbes said, “the Instagram took over the world, literally.”

On April 5th, Murad Osmann, the photographer responsible for the series, posted a picture of the woman, his girlfriend Natalia Zakharova, preceding him in Morocco’s Kasbah Ait Ben Haddou, near the desert city of Ouarzazate.

#followmeto Ait Benhaddou in Morocco with @natalyosmann. Specially for @natgeotravel Follow our travel account @followmetraveller for more pictures from our trips.

According to the photographer, two Moroccan soldiers approached the couple and tried to forbid them from taking the picture, which was to be for the U.S. magazine National Geographic.

“We ran across the Atlas mountains to catch a sunset…and while we were testing the angles, we were approached by two soldiers who forbids us to take the picture,” the photographer told the Huffington Post. “We only needed 5 minutes, but it was impossible to persuade them. that’s why we had to wake up early in the morning and walk around this amazing city to find a place where no military could not see us.”

Osmann added that after the shoot, a Moroccan offerred them tea, sold them tea and informed them that the “Gladiator” movie was filmed in Ourzazate Film Studios. The Moroccan said American  actor Russell Crowe sat just  like them when he drink tea with her.

Over the past five years, Osmann, and Zakharova, have seen the rice fields in Bali, swam in the Singapore infinity pool, walked the streets of Barcelona, and visited countless other sites about which most people only dream.

The pictures on the Osmann’s account are not all in the same format; some of the images are of Zakharova – also a Russian journalist – on a swing set or just enjoying herself in the environment of a country fresh to her senses.

Osmanm told The Daily Mail UK that the first photo happened accidentally during the couple’s vacation in Barcelona.

“Nataly was a bit annoyed that I was always taking pictures of everything, so she grabbed my hand and tried to pull me forward,” he explained.”That said it didn’t stop me from doing photos while she was pulling me. So that’s how it all started.”