Manama -Member states of the Gulf Cooperation Council (GCC)) renewed their support to the Moroccan autonomy plan on Thursday. 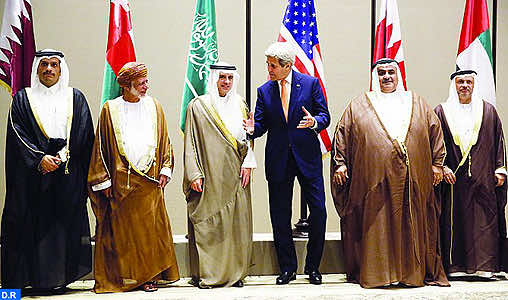 Manama –Member states of the Gulf Cooperation Council (GCC)) renewed their support to the Moroccan autonomy plan on Thursday.

The foreign ministers of member countries of the GCC expressed during a meeting held Thursday in Manama with US Secretary of State John Kerry, their support to Morocco on the Sahara issue and to the Moroccan autonomy plan, according to Maghreb Arab Press (MAP).

At a joint press conference with John Kerry at the end of the meeting, the Saudi foreign affairs minister, Adel Al-Joubeir, said the GCC foreign ministers expressed ”their support to Morocco on the Sahara issue” and stressed the importance of the Moroccan autonomy plan, the same source added.

The meeting is part of preparations of the US-Gulf summit, scheduled for April 21 in Riyadh.

The GCC’s support comes the same day when the US representative to the United Nations said that the Moroccan autonomy plan could offer the basis for reaching a mutually acceptable solution to the Western Sahara conflict.

During a closed-doors meeting held at the request of Venezuela and Uruguay, the US representative said the “Moroccan autonomy Plan is an approach that could meet the aspirations of the population of Western Sahara,” sources from inside the Security Council told Morocco World News on Thursday night.